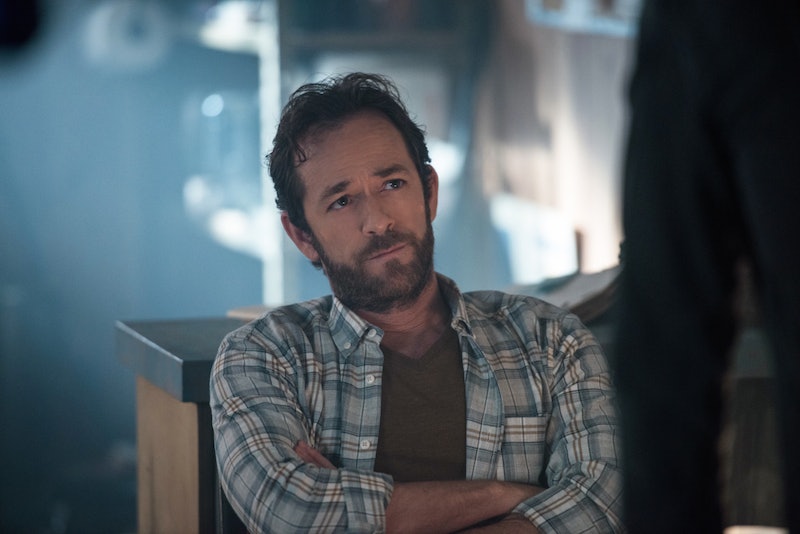 Well, we knew this day was bound to come sooner or later, but that doesn't make this end of an era sting any less. On April 21, Riverdale showrunner Roberto Aguirre-Sacasa revealed via Twitter that Luke Perry's final Riverdale episode will air this week. Perry's final episode, "Fear the Reaper," will air on Wednesday, April 24, on the CW.

The news from the show's creator comes nearly two months after Perry's tragic death. On March 4, Perry unexpectedly passed away at the age of 52 after experiencing a "massive stroke" earlier that week, as reported by TMZ reported. The beloved actor first gained notoriety in the '90s playing teen heartthrob Dylan McKay on Beverly Hills: 90210, but had recently acquired an entirely new generation of fans thanks to his role as Fred Andrews on Riverdale.

"This week’s #Riverdale is the last episode Luke filmed," Aguirre-Sacasa tweeted on Sunday, April 21. "As always, Fred’s imparting words of wisdom to Archie. A beautiful, true moment between a father and his son. Wish these scenes could go on forever."

Fans have already started to re-mourn Perry's death in the comments section of Aguirre-Sacasa's post. "It's so hard to see him on screen knowing that he's not with us anymore but i know it's gonna be even harder this week cause it's the last time we're gonna see him at all," one fan, @shonidale, wrote. "I’m so not ready for this episode," another fan, @CaitlynF26, admitted. "I cant believe after this episode their will be no more Fred Andrews scenes."

Shortly after Perry passed away, both Aguirre-Sacasa and Cole Sprouse (who plays Jughead Jones) opened up to Entertainment Tonight about how they were planning on addressing his death within the show. "I can't go too much into the spoilers of it, but we do have something planned narratively," Sprouse told the outlet.

"Honestly, we are, I think, all still in shock and are all still processing and grieving," Aguirre-Sacasa added on March 18. "We know that we have to address it in some way, but we’re giving ourselves a little bit of time and space before we figure out the best way to honor him."

The Riverdale creator then continued to explain how he felt Perry's loss would affect the show. "When I was with the crew, I said, 'It will never be the same,' and that’s true because Luke was such a part of the show," he told ET. "There are still a few more episodes that have Luke in them, so we’re glad to share those."

Now, though, Perry's on-screen appearances as Fred Andrews are sadly coming to an end. And while he's gone, he certainly won't be forgotten — not by his family and friends, and not by the show, either. "His spirit, which was so generous and wise and vivacious, we hope will infuse every episode," Aguirre-Sacasa told ET back in March. "So in my mind, every episode for the rest of time on Riverdale will have a bit of Luke in it."

It'll be interesting to see how they handle Perry's final episode, and how they address his absence from the show going forward. No matter how they choose to explain his departure from the show, though, it'll for sure be pretty tough to watch. Brace yourselves, Riverdale fans — and don't forget the tissues.