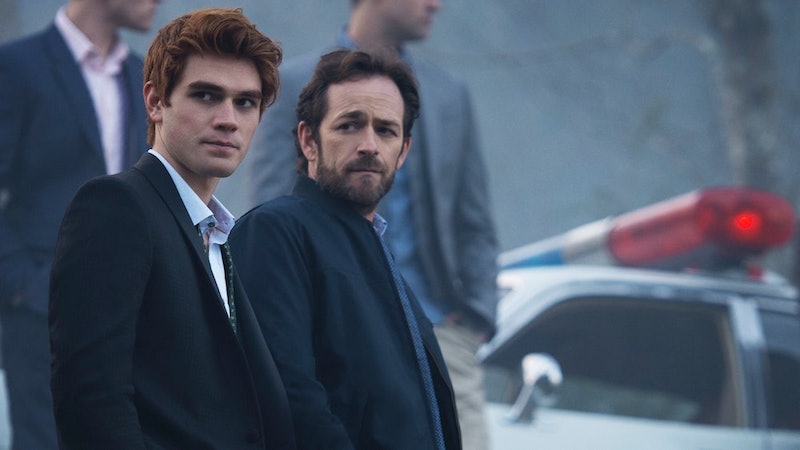 Try not to get too emotional: a new Riverdale blooper reel featuring the late Luke Perry was unveiled at the series' panel at Comic-Con on Sunday, July 21. In Hall H, the show’s producers offered fans a glimpse of behind-the-scenes footage of Season 3, which featured lots of laughs. In the clip, fans are graced with silly archival footage of Perry, who depicted Fred Andrews in the CW series. Perry, a Hollywood veteran who first gained recognition in the 1990 hit TV show Beverly Hills, 90210, died on March 4 from a stroke. He was 52. In the blooper reel, the late actor can be seen laughing through filming hiccups alongside his TV son KJ Apa, who plays Archie Andrews.

"That’s Archie. He’s graceful. He’s a dancer, plays a little music," Perry joked after Apa accidentally knocked some props over during a scene. "Just look into my eyes," he says in a later scene of the blooper reel.

At the show's Comic-Con panel in San Diego on Sunday, showrunner Roberto Aguirre-Sacasa paid homage to the late actor before unveiling the footage. "We suffered a huge, huge, huge loss and it’s something that we’re going to be feeling for as long as we’re lucky enough to keep making the show," Aguirre-Sacasa told the crowd in Hall H, per Entertainment Weekly. On how the series’ will address Perry’s death in the upcoming fourth season, the showrunner said Molly Ringwald, who depicts Fred’s wife Mary Andrews, will return to the series in a big way. "She’ll be Archie’s mom more or less full-time this season," Aguirre-Sacasa said.

More so, Aguirre-Sacasa revealed that the Season 4 premiere would honor both Perry and his fictional character Fred Andrews. The premiere will also star Perry’s good friend Shannen Doherty, who starred opposite the late actor in Beverly Hills, 90210. "We really wanted to honor Luke, we really wanted to honor Fred," Aguirre-Sacasa told fans at the panel. "We wanted it to be a very special episode, kind of [a] standalone."

According to Aguirre-Sacasa, a potential Doherty guest appearance is “something that Luke wanted to happen since Season 1." According to Variety, the showrunner told Comic-Con attendees, "They were such good friends, and when we were putting together this tribute episode, we wanted to make it as special as possible, and so we asked Shannen to do a pivotal, super-emotional role. She read the script and immediately said ‘yes.’ It’s very impactful."

Also featured in the bittersweet blooper reel: Apa — who hails from New Zealand and therefore has an accent — hilariously struggling to pronounce the word "gargoyle," Camila Mendes avoiding a run-in with a huge dragonfly, Casey Cott struggling with his French, and much more hilarity.

At the panel, Aguirre-Sacasa also teased some new storylines for the upcoming season. According to the showrunner, Veronica and Cheryl will become partners in a Risky Business-inspired storyline, Jughead will attend a new school, Archie will display his musical chops once again and start a band called The Archies, and Kevin will direct another musical in the hopes that "no one dies this time." And while Josie is off to the Katy Keene spinoff, the aspiring songstress will make an appearance in the Season 4 premiere.

Riverdale returns to the CW on October 9. And, yes, you'll probably need a lot of tissues.