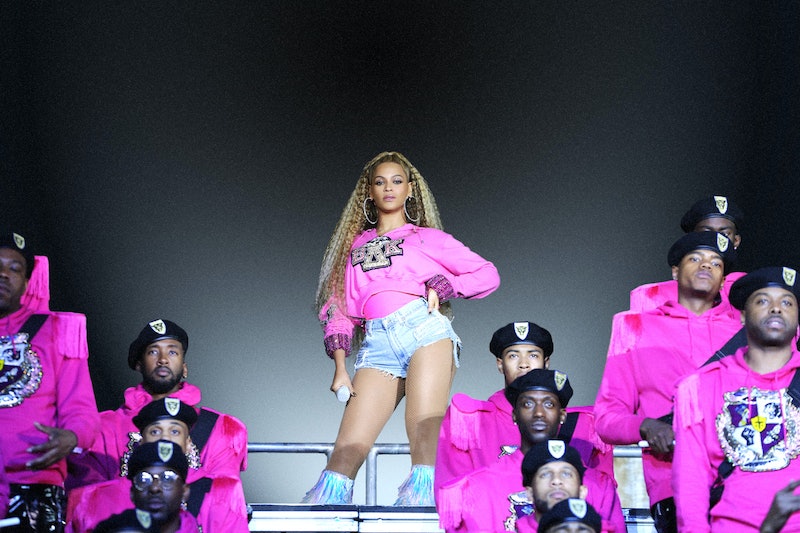 The Queen Bey might have to make room for hip hop's new princess! Based on the fan reaction to Blue Ivy's appearance on Beyoncé's Homecoming Netflix special, it seems as if the 7-year-old's surprise appearance was foreshadowing her future musical superstardom.

In addition to showcasing all of the hard work, innovation and dedication that went into Beyoncé's history-making performance at Coachella in 2018, the Netflix doc — and the surprise album that she released alongside it — featured an adorable a capella performance of "Lift Every Voice and Sing," courtesy of Beyoncé's oldest daughter, Blue. "I want to do that again! It feels good!" Blue can be heard saying after her impromptu performance, to which her mother responds, "You want to do that again? You're like Mommy, huh?" The Netflix special also showed Blue learning some of the incredible choreography that Beyoncé showcased in her performance, leading the backup dancers with as much confidence and charisma as her world-famous mother.

And if Blue does decide to follow in her mother's footsteps, it seems as if she'll already have her own fanbase in place, thanks to the support of the BeyHive on social media:

Blue Ivy's appearance in the Homecoming special is far from the first time that she's proven her star power; in fact, it's not even the first time that she's appeared on a massive hit album. In addition to her cameo appearance on Beyoncé's "Blue," Jay Z's song, "Glory" opens with the sound of Blue's heartbeat, which made her the youngest person to ever appear on a Billboard Chart. And in 2017, the rapper included a bonus track on his 4:44 album that featured Blue freestyling and officially made her a musical icon before the age of 10.

"She went and she got the headphones and she climbed on a little stool, and she just started rapping," Jay Z explained in a Rap Radar interview about seeing his daughter's musical ability shine at such a young age. "Five minutes of her doing that — I'm talking about amazing pockets! I was like, 'Oh, she understands the concept of a hook! She's 5-years old!" The legendary rapper even honored Blue's musical ability by releasing an animated music video of "Blue's Freestyle" for her birthday in January 2018.

And, of course, there was Blue's scene-stealing appearance in Beyoncé's "Formation" music video, in which she was scene dancing in a white dress alongside several other small children, in order to underscore the song's message of empowerment, and the way that Beyoncé hopes to pass the torch from one generation to another. Based on her experience in the recording studio and in front of the camera, the BeyHive shouldn't be shocked if Blue does decide to follow in her parents' footsteps. After revealing that she's been performing "since birth," her grandmother, Tina Knowles Lawson, told Us in 2018 that, "whatever she wants to do, she will definitely be able to do it because she’s good at a lot of things." (Just take a look at Homecoming, and you'll see that's definitely true.)

Regardless of whether or not she does end up following in her mother's footsteps, Beyoncé has said that she is constantly aware of her legacy, and of ensuring that Blue and her siblings, Rumi and Sir, understand their own place in the world. "My mother taught me the importance not just of being seen but of seeing myself," Beyoncé wrote in an essay for Vogue in September 2018.

At the end of Blue's track on the Homecoming album, Beyoncé says, "I feel we made something that made my daughter proud," and while that's certainly true of the way that #BeyChella completely changed the way the world sees both Beyoncé and music festivals forever, it also seems likely that Blue's performance made her mother just as proud. And if she does decide to pursue a career in show business, it seems as if there are already plenty of fans ready to bow down to the new queen, Blue Ivy.