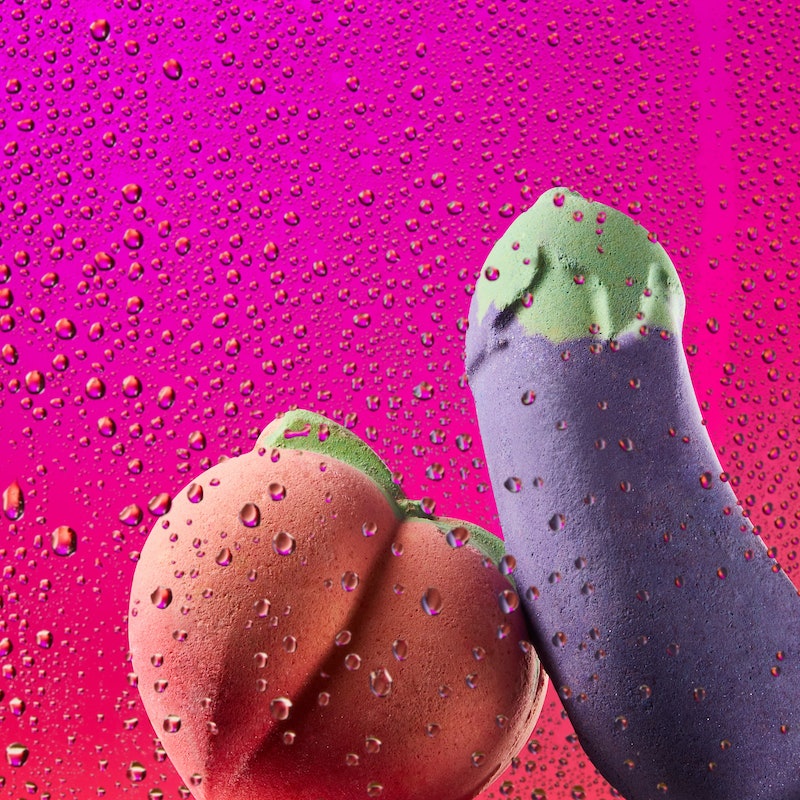 The world is two days into the new decade, and Lush is already coming through with the throwbacks. Lush's eggplant bath bomb and its fizzing peach counterpart are returning in 2020, and yes, the bathing products are as Instagram worthy as they have always been. The difference this year, though, is that the eggplant and peach are getting new friends.

According to the brand, over 90,000 eggplant bath bombs were purchased in 2019 after the suggestively shaped bathing product was released and proceeded to go viral. In fact, Lush explains in a press release that the product even had to have a warning not to use it for, well, something other than bathing.

While the eggplant-shaped bomb may have gotten some of the most attention initially, its peachy counterpart wasn't close behind. Thanks to a viral Instagram video of a Lush factory employee creating the bomb, the fruit scented product actually ended up selling more units than the eggplant fizzer at 165,000 units purchased.

With products that popular and that prone to make the internet lose its collective mind, of course Lush is bringing back its most giggle worth bombs. Both Peachy and Eggplant will return to Lush online on Jan. 3 and in stores on Jan. 6.

This time, though, these suggestive bath bombs have new friends.

If the bath bombs made you feel just a little dirty, well, Lush has now turned them into soaps so you can kind of wash away that feeling. Thanks, in part, to the popularity of the two bath bombs, Lush has expanded its eggplant and peach products to include two identically shaped soaps to the OG bombs.

The new Eggplant and Peachy soaps will retail for $6.95 each and carry the same scents as the original bath bombs. Like the returning fizzers, each soap will launch online at Lush on Jan. 3 and in stores on Jan. 6.

While Lush's eggplant bath bomb had its viral moment, the brand isn't a stranger to getting the internet talking. Back in Aug. 2018, one of Lush's employees at a retail location in Cambridge, Massachusetts blew up the brand's Instagram thanks to his uncanny resemblance to Leonardo DiCaprio. In January of that year, the brand teamed up with ASMR YouTuber ASMR Darling to create an entire video dedicated to its Sleepy range of products. As of press time, the video has a whopping 1.7 million views.

Now, Lush's eggplant and peach bath bombs are back in all of their viral glory. If you want the sexiest bath art ever, grab these products when they drop on Jan. 3.

More like this
All The Products Hailey Bieber Used For Her Birthday Makeup Look
By Olivia Rose Ferreiro
Kim Kardashian On The Beauty Hack That “Changed My Life, My Skin, My Confidence”
By Taylor Jean Stephan
The 117 Best Black Friday Beauty Deals Of 2022 To Shop
By Audrey Noble
M.A.C. Cosmetics' Black Friday 2022 Sale Includes Major Lipstick Deals
By Audrey Noble
Get Even More From Bustle — Sign Up For The Newsletter