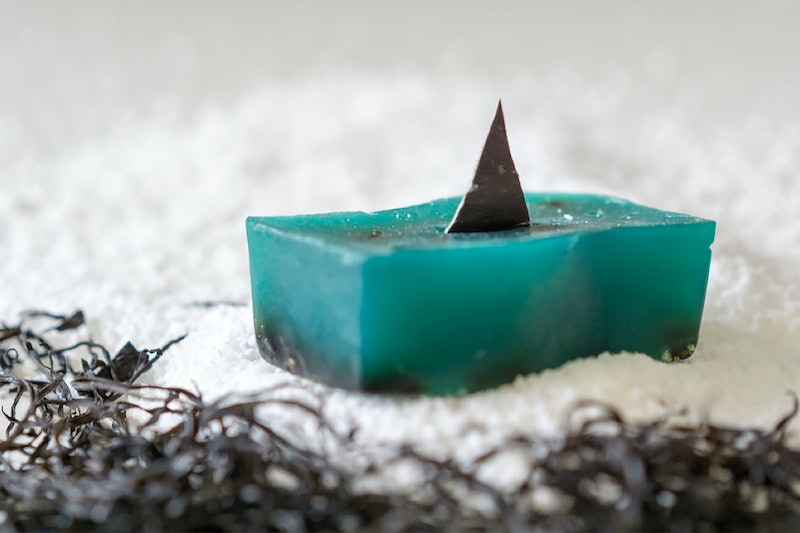 It may not be Shark Week, but LUSH is all about protecting the species as part of the campaign for World Ocean Day. The charitable and ethical beauty company is no stranger to philanthropic endeavors, and now, LUSH's Shark Fin Soap is coming back for another round of giving back to the environment.

In case you haven't seen or shopped LUSH's Shark Fin Soap before, the product is basically exactly what it sounds like. The soap is a gorgeous blue-hued bar-style wash that's typically cut into a square, and on the top, the brand adds an adorable faux shark fin. Even if it wasn't for a charitable cause, you'd probably want to buy it anyway just based on how cute it is.

However, that's the great thing about shopping at LUSH. The brand's Shark Fin Soap isn't just adorable. 100% of the sales price of the product will benefit the Rob Stewart Sharkwater Foundation. Named after the late environmentalist Rob Stewart, the organization focuses on the conservation of oceans and the protection of sharks that are often misunderstood predators through education and awareness. Plus, for every online sale of the soap, customers will also receive a sticker they can place in businesses that sell products containing shark through the brand's #SharkAttack campaign.

One of the places where the #SharkAttack campaign may be most important is the beauty industry which has its own contribution to endangering shark populations. According to a press release from the brand, popular beauty ingredient squalene (not to be confused with squalane) is actually shark liver oil meaning that sharks are often hunted and killed so that the ingredient can be used. While squalene can be created from vegan sources, 90% of shark squalene makes it way into products such as sunscreen, foundation, and lipstick.

According to the brand, the preservation of sharks is connected to a much larger conversation about ocean conservation as a whole. LUSH Ethical campaigns Specialist Carleen Pickard says, "Sharks are the entry point to a greater conversation on ocean protection. We’re in the midst of a global climate crisis and sharks play an integral role in maintaining the health of not only our oceans but the planet too. With this campaign, and through the continued work of The Rob Stewart Sharkwater Foundation, we’re educating the public on actions they can take before our oceans become unthinkably blue."

If you want to help LUSH and the Rob Stewart Sharkwater Foundation preserve shark populations, the brand's Shark Fin Soap is officially up for sale both online and in LUSH stores. However, you'll probably want to move fast. The bar of soap only just $5.95, and it's limited edition. Once LUSH online sells out and your local store does as well, that's it. No more shark fin soap for you.

While sure, the bar of blue, seaweed-infused, lime scented soap is adorable with its paper shark fin, the LUSH product is so much more than that. With 100% of the sale price dedicated to the Rob Stewart Sharkwater Foundation, you can feel good about your next shower.