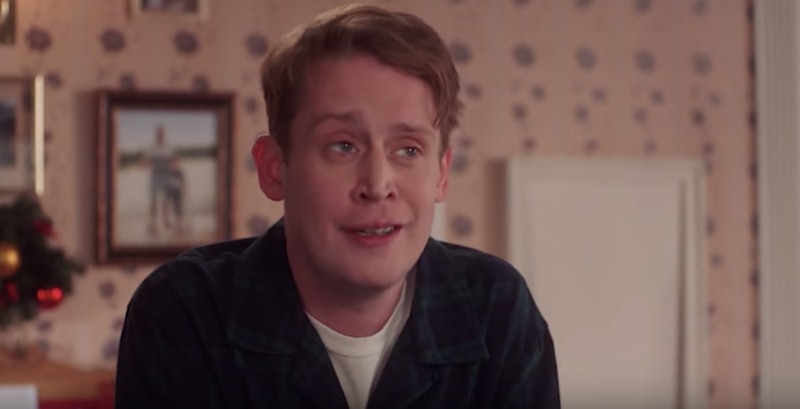 Ever wonder what would've happened if Kevin McCallister had been left home alone in today's tech-savvy society? Thanks to a new Google holiday ad, that question can now finally be answered. The commercial features Macaulay Culkin recreating Home Alone scenes and puts a modern-day twist on the holiday classic we all know and love. Kevin may be all by himself yet again, but with the help of Google's A.I. by his side, he has all the help he needs to keep those Wet Bandits at bay.

The ad parodies the original film, showcasing Culkin as a now-adult version of Kevin, who faces similar scenarios his younger counterpart tackled in the movie: pranking the pizza delivery guy, jumping on the bed, and, of course, shaving (though, without all the screaming since he's currently out of aftershave). The one big difference is that this time he has the help of Google Assistant, which proves to make his life so much easier. In fact, he can now finally eat that delicious mac 'n cheese in peace while Google does everything else for him. Yup, things are definitely starting to look up for Kevin, making this whole "home alone" thing not so scary after all. Marv and Harry wouldn't even stand a chance these days.

It's hard to believe that Culkin was only nine years old when he first took on the role of Kevin for the movie's big 1990 release, but now at the age of 38, the former child star still manages to slip back into the role as if no time has passed. It's enough to make anyone watching immediately feel like a kid again.

“#heygoogle Have you ever wondered what Kevin McCallister is like as an adult? Me neither,” Culkin tweeted out to fans on Wednesday upon the ad's release. “But just in case you’re curious you should totally watch this #ad.” It's nice to know that Kevin is doing so well for himself and didn't suffer from any long-term abandonment issues after being forgotten by his family not once, but twice (and those are just the times that we know of).

This isn't the only time this year, though, that Culkin has journeyed back to his Home Alone roots. He also recently appeared in a new episode of James Rolfe's Angry Video Game Nerd web series where he reviewed Home Alone video games because, yes, that's totally a thing that exists now. (If you haven't checked out the video yet, please do so ASAP.)

Needless to say, avid fans of the original movie are simply loving all of the extra content Culkin is gifting us with this holiday season. (We are not worthy!) It just goes to show that, deep down in his heart of hearts, he loves the legendary franchise just as much as the rest of us do. And while this latest holiday ad may not be quite as good as, let's say, a Home Alone revival, we can probably all agree that it's definitely without question the next best thing.