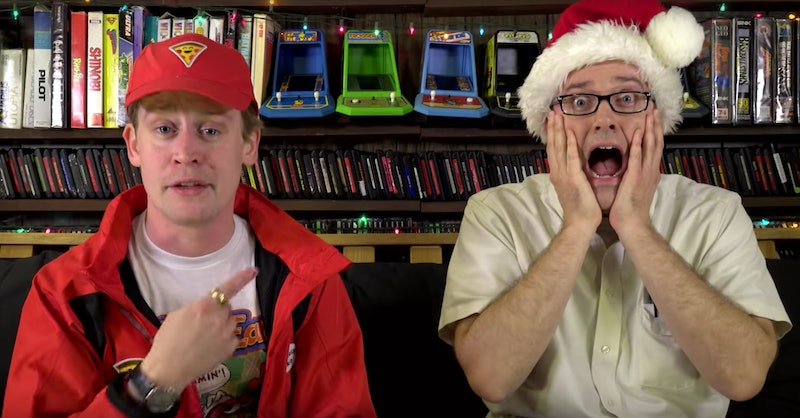 Kevin McCallister's eating junk food and playing rubbish, but don't even think about trying to stop him. In a new episode of James Rolfe's Angry Video Game Nerd web series, Macaulay Culkin reviews Home Alone video games, pays homage to Little Nero's hapless pizza delivery driver and to the Pizza Underground, and defends the franchise's honor as if it were the McCallister family's home. Yes, Home Alone video games. As in, more than one. Home Alone is, as Forbes noted earlier this month, the highest-grossing Christmas movie of all time in the U.S. (and its first sequel, Home Alone 2: Lost In New York, is the fifth), and the video games based on the franchise are one magical piece of its enduring legacy.

But uh, apparently, most of those video games don't quite pass muster with Kevin McC. After Culkin and Rolfe try out several of the games, the star of the first two movies in the Home Alone franchise looks like he just found out Buzz wolfed down the last of the cheese pizza. In a monologue that is as stirring as it is biting, Culkin says,

"It's bad enough that you have one bad game based on you. But what about ten? Is this how you live? It's every boy's dream to be in a video game, and then it turns into a f*cking nightmare. A child nightmare."

So how does he come to terms with this "nightmare"? Rolfe suggests they treat these old timey video games as if they were the Wet Bandits trying to break into the McCallister family's manse on Christmas Eve. Rolfe and Culkin set up several Kevin McCallister-inspired booby traps around the set and let the game cartridges keep the change, those filthy animals.

You probably did not know you needed this reenactment of the Home Alone booby trap montage, but now that it is in your life, you will wonder how you got this far without this video that includes things like a Super Nintendo cartridge burning its hand, er, plastic exterior on a piping hot door knob. You will feel like you ordered three scoops of ice cream instead of two for the very first time, because why not? You're not driving.

And this booby trap montage is just one small, albeit exquisite piece of the video. A significant chunk of this episode of Angry Video Game Nerd is dedicated to footage of the actual games, and wow is that footage mesmerizing, confounding, and exhilarating. And every now and again, it makes me want to get my paws on an ancient game console. I'm not kidding when I say the Home Alone game for Sega Genesis looks like a blast. The feature where you get to use a blueprint to set traps, the aggressive spider, the house full of robots, the ghosts— frankly, this game looks about as thrilling as a sled ride that begins at the top of a long flight of stairs and ends in a heaping pile of fresh snow, but, hey, Kevin — err, Culkin, — knows best. And if his loathing of Home Alone video games leads to more reenactments of the '90s classic, then let him loathe away.