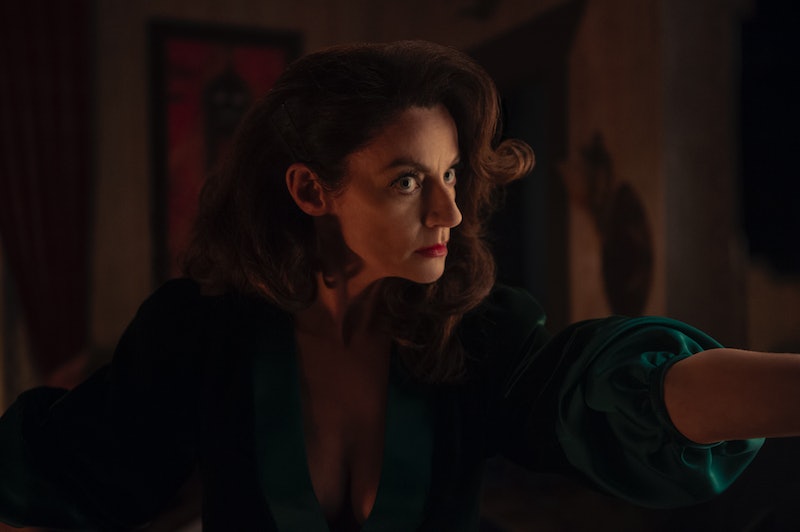 During Chilling Adventures' Season 1 finale, Ms. Wardwell explains to her hostage, Principal Hawthorne, that she tricked Sabrina into signing the Book of the Beast. Though it's already been made clear she's not Sabrina's teacher, this is the first time we learn her real identity. "I'm the Mother of Demons, the Dawn of Doom, Satan's concubine," she says. "I'm Lilith, dear boy. First wife to Adam, saved from despair by a fallen angel. I call myself Madam Satan in his honor." She goes on to tell him that she plans to make Sabrina the devil's soldier so that the Dark Lord will make her the Queen of Hell, then eats him to cover her tracks.

In the Chilling Adventures comics, also written by series creator Roberto Aguirre‑Sacasa, Madam Satan comes to town in the very first issue. But as noted by IGN, it's not until issue No. 2 that her intentions become clear. Sabrina's mom, Diana, is living in a psychiatric facility after Sabrina's dad, Edward, cast a spell that incapacitated her, and Madam Satan goes to visit her. It's there that she learns of Sabrina's existence and decides to terrorize her. Diana tries to warn her daughter in a dream that the "Devil's Concubine, the Queen of Hell" is coming and wants to bathe in Sabrina's blood. And while Diana is unable to reveal Madam Satan's name, she tells Sabrina that this hellish woman was her father's first love. Unfortunately, Sabrina doesn't remember the details of her nightmare when she wakes up.

The reason Madam Satan, whose real name is Iola, is after Sabrina is because she's the scorned former lover of Edward. After he left her for Diana, she killed herself. But years later, Betty and Veronica — who are witches in the comics — accidentally resurrected her from Gehenna, the capital city of hell. As soon as she found out about Sabrina, she set out to exact revenge, posing as her teacher, Ms. Evangeline Porter, in order to weasel her way into Sabrina's life. Like her TV version, she has a crow who helps her do her evil bidding.

Rather than take over the body of an existing teacher, however, the comic book iteration of Madam Satan stole the face of a girl at a camp. Later, she met Baxter High teacher Evelyn Gardenia at the movies and put her into a permanent coma. Madam Satan then took over Ms. Gardenia's responsibilities at the school as Ms. Porter. That includes running the school's production of Bye Bye Birdie, which is a little bit different from being the faculty advisor of the women's advocacy group WICCA.

Slowly, Madam Satan begins to ruin Sabrina's life, even causing Harvey to stumble upon Sabrina's Dark Baptism in the woods, where he was killed by other witches. In the TV show, it's Harvey's brother that dies — though under different circumstances — but maybe this is a sign that Madam Satan will go after Harvey in Season 2.

So, she may not be exactly like the comics version, but you should expect Madam Satan to continue torturing Sabrina for seasons to come. And hopefully, for Sabrina's sake, that doesn't put Harvey in harm's way.