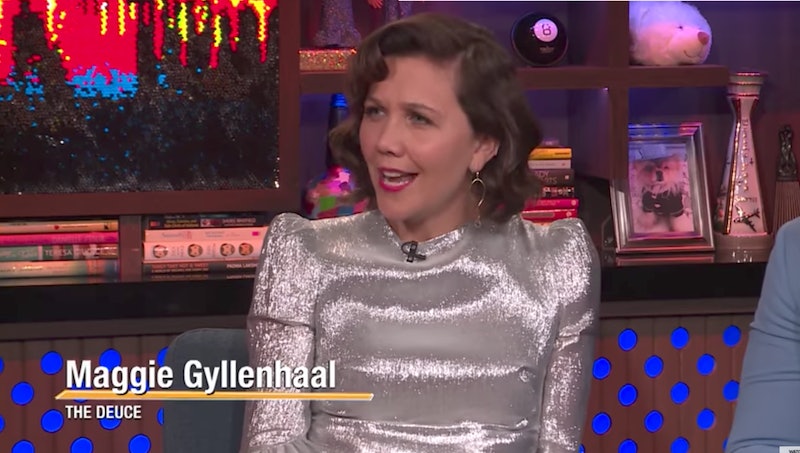 Breakups are as fun as eating glass, but you know what's worse? Breaking up and not getting your stuff back, like Taylor Swift infamously outlined in "All Too Well." But, apparently, Maggie Gyllenhaal doesn't have Swift's scarf, or so she implied in a TV interview that has prompted the most pressing question of our time: if she never had it, then who has Taylor Swift's scarf now?

Let's rewind a little. Back in the hazy, crazy days of 2010, two of the most photogenic people in America were once reportedly in a relationship for a few months. The world rejoiced by getting overexcited about their maple latte consumption and by taking blurry pictures of Swift and Jake Gyllenhaal in Nashville. But after they called it a day, the songstress proceeded to pen an album, Red, which contained a song rumored to be about Gyllenhaal, "All Too Well." The song isn't just about an ex-boyfriend she feels passionately about, but an essential autumnal item of clothing.

In the song, she sings "Left my scarf there at your sister's house/ And you've still got it in your drawer even now." So, it was at Maggie Gyllenhaal's place before Jake took it home, right? According to Maggie, wrong (probably). On being asked about the scarf, she seemed bemused: "I am in the dark about the scarf. It's totally possible. I don't know." Now, hang on a second. Something doesn't add up here.

Maggie goes on to stress how many people ask her about the scarf and how she's like "What are you talking about?" If her brother, as the song claims, has the scarf "'cause it reminds you of innocence and it smells like me," wouldn't Maggie be aware of it? Wouldn't Jake have swung by to pick up the scarf, tearfully telling his sister that he's just going through a tough time and needs a little something to snuggle with through the dark days of separating from the blonde? The fact that someone had to explain to the actor what the scarf thing was even about suggests she really had no idea about the accessory and hence, that it was maybe never at Maggie's house in the first place.

So where could it be?

1. Jake Has The Scarf

Think about it this way. The Red singer loves leaving little clues for her audience to decipher. What if the reference to leaving the scarf at her beau's sister's house was just yet another hint to listeners that yes, she was in fact talking about Jake Gyllenhaal. If we cut out the middle (wo)man and take the rest of the song at its word, then it's in the Donnie Darko actor's drawer somehow. Simple. And if the breakup was as difficult as "All Too Well" makes it sound, no wonder the blonde isn't phoning him up just to ask for her scarf back.

2. Maggie Has The Scarf, But It's Great & She Doesn't Want To Give It Back

We don't, sadly, have any further information about what the scarf is like. Still, say what you like about Swift, but you've got to admit that she rarely has a hair out of place. As such, one could presume even her 2010-era scarf is nice. And you know what people sometimes do when fancy stuff is left at their house? "Borrow" it for a bit longer. We've all been there. Maybe Maggie's even forgotten it isn't hers by this point?

3. Taylor Swift Has It

Pushed down the side of a car seat. Left it in the pocket of a coat that she wore once but that made her shoulders look big and which is now languishing at the back of her closet. Used to pad her cats Olivia Benson and Meredith's bed. All legit possibilities. Just because Swift can't find it doesn't mean Jake has it, even if it went missing at that time. And, well, that line about him keeping it because it smells like her sounds like the sort of wishful thinking lesser humans than Swift have used to make it through their breakup with their sanity intact.

4. The Scarf Doesn't Exist & Neither Did Their Relationship & Are Any Of Us Real, Anyway?

In the words of Vulture, "Did the scarf ever exist? Did Jake and Taylor’s love ever exist?" Preach. Given the fact that Jake and Taylor's relationship was rumored to be a PR stunt and Maggie has never heard of this scarf, there's a good possibility either the couple never dated, or never dated long enough for her to meet his sister, or Swift never left the scarf at Maggie's house or... deep breaths... the scarf was a neat extra detail in a seemingly confessional song that made it seem even more intimate but which didn't. Actually. Exist. Except. As. A. Metaphor.

But, hey. Much like Swift's exes, the missing scarf is the gift that keeps on giving. Until it's absolutely, positively, 100 percent been located, Swifties should never give up the quest to find it.

More like this
Taylor Swift & Her Mom Clap Back Against The “Shake It Off” Plagiarism Lawsuit
By Jake Viswanath
Taylor Swift Calls Dwayne Johnson "The Man" After Revealing New "Taylor's Version" Song
By Jake Viswanath
Taylor Swift’s Reported Private Jet Use & Carbon Footprint Set Twitter Ablaze
By Stephanie Topacio Long
Who Is Camila Cabello Dating? She's Getting Cozy With Lox Club CEO Austin Kevitch
By Radhika Menon
Get Even More From Bustle — Sign Up For The Newsletter