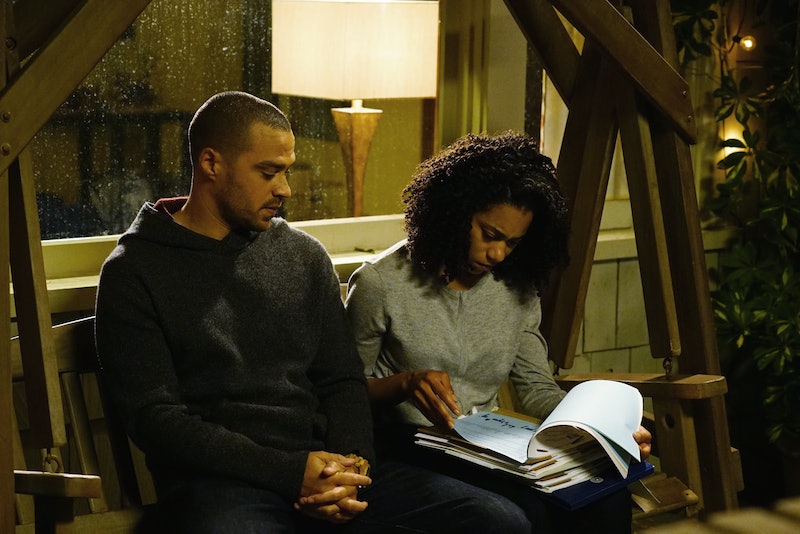 Spoilers ahead for Grey's Anatomy Season 16. After finally getting together in the second half of Season 15, Maggie and Jackson broke up in the Grey's Anatomy Season 16 premiere and it was not a pretty sight. They finally realized their differences were too great to overcome during the camping trip in the Season 15 finale and within minutes of the premiere were totally broken up — and there is absolutely no way they're getting back together after their last scene together.

Many fans were not on Team Jaggie when Jackson and Maggie got together in the first place, mostly because so many fans were invested in April being his one, true love. In November 2018, Kelly McCreary, who plays Maggie, told Bustle she didn't worry about fan feelings, because they would all come around to loving the couple. “Lots of couples are contentious," she said. "I think that the more people spend time with [Jackson and Maggie], the more they will have the opportunity to really appreciate the journey that either one is on together.” It sure sounded like the duo was in it for the long haul, but Jackson is already seeing another woman and...seems happier than ever.

That woman is Victoria "Vic" Hughes, played by Barrett Doss, from Station 19. She's had her own set of troubles on the spinoff: she was set to be married until her fiancé, Lucas Ripley, died of a heart condition. To make matters even more complicated, Vic was his "secret" girlfriend and Maggie was his doctor when he was brought to Grey Sloan by Owen Hunt after he collapsed in a flower shop after unknowingly inhaling a chemical that triggered his heart issues.

Both Jackson and Vic are probably not ready to date anyone else right now in a serious way, as they discuss, but they are most definitely already dating judging by their flirtations. Whether they last or not is a story that will be explored throughout the season, but what's easy to see is that the way Jackson treats Maggie (and vice versa) in this split will have real repercussions for the rest of the staff at Grey Sloan.

Think about it: Maggie's dad, Richard Webber, is married to Catherine Avery, Jackson's mom. How will Thanksgiving be if Jackson and Maggie can't even look at each other? It's also going to make working together awkward and possibly hostile; they wouldn't be the first set of exes to bicker over an open patient in the operating room or have to be called out by Bailey for focusing on their troubles instead of her pages.

It's going to be a long, drawn out breakup for sure, and the fact that Maggie kinda-sorta knows Vic makes it all the worse. But if everyone is honest with themselves, this breakup might be good news. Maggie deserves a love interest that lasts and Jackson was way too flakey for that — remember when Jackson just disappeared into the woods last year? Hopefully the writers give her someone to lust after in the on-call room soon.

This article was originally published on Sep. 26, 2019