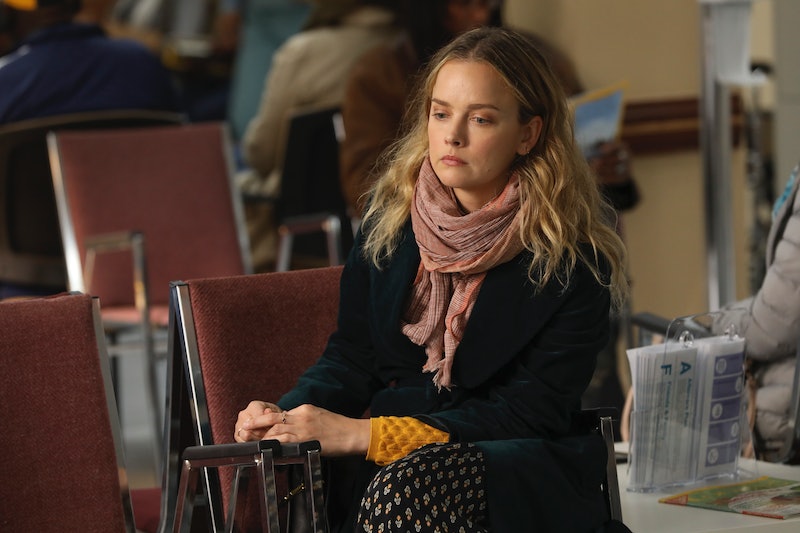 Maggie is stuck in the in-between on A Million Little Things. Her cancer has come back, and she doesn’t want to treat it, because she doesn’t want to go through the pain and uncertainty of chemotherapy once again. But Gary, her de facto boyfriend, doesn’t want to hear any of it — he thinks she should go for the chemo and try, at least try, to live the longest life she possibly can. His pleading seems to have made her reconsider things and it looks like maybe, just maybe, Maggie's cancer treatment on A Million Little Things will have a happy ending. But if she does decide to get treatment, it shouldn’t be because of Gary — it should be because she wants to live life on her own terms.

Gary and Maggie met in a breast cancer support group, after which they had a rendezvous in the bathroom and Gary took her to his best friend’s funeral. That’s how all great romances start, right? That being said, Maggie fits nicely in with Gary and his group of friends, and she’s been privy to a lot of scandalous information that a newbie wouldn’t otherwise know — but I guess that’s what happens in times of crisis. Gary is a fun guy, but from the moment he found out she was sick again (through Maggie’s ex, who came to Boston to convince her to have chemo, also), he has been on the “let’s get chemo” train. It makes sense.

It's not like Maggie has made this decision on a whim. She's obviously weighed the pros, cons, and come to a decision that made sense for her.

People want the people they care about to live. Except that Maggie has repeatedly told Gary that she doesn’t want to have treatment, it's even why she packed up her old life and moved to Boston, and yet, Gary is fixated on it.

Yeah, he loves her, even if he hasn’t said it, and yeah, he wants her to be around longer, but ultimately, it’s not his decision. Gary and Maggie just met — if she’s not going to start treatment when prodded by people that have known her for longer and know her better, when will she start? Gary thinks that he is expressing his devotion to Maggie by endlessly trying to convince her to get chemotherapy, but really, he’s trying to take away her own bodily autonomy. What Gary is saying, basically, is that Maggie’s wishes about how she wants to move forward with her cancer don’t matter, and his thoughts and wishes are more important.

Of course his point is well taken, but it's time for him to stop moping, monologue-ing, and spray painting his pleas on the side of city buildings and do as she asked him. Which was to respect her decision and be there for her or get the heck out. It's not like Maggie has made this decision on a whim. She's obviously weighed the pros, cons, and come to a decision that made sense for her. It's unfair of Gary to do the extra emotional labor of feeling guilty about hurting him (or consoling him) for her cancer.

Maggie seems to be at a make-or-break point in her disease; bruises have begun to show up on her body more rapidly than before. Soon, it will be too far to go back. Her cancer will have progressed to the point where there is no point to treating it, and Gary will just have to live with it.

For now, Maggie has chosen her path through the woods, but if viewers have learned anything from watching A Million Little Things, it’s that nothing is certain. The whole show is a mystery. Maggie wants to live every moment to its fullest right now, but as her feelings develop for Gary, there is a chance that she could change her mind. Maybe, before it’s too late, she’ll decide that she wants to grow older with this ridiculous man and his tragic friends. But ultimately, Maggie’s decision about her treatment is hers and only hers to make — not Gary’s.

More like this
What’s New On Netflix: Ana De Armas’ 'Blonde' & A Nick Kroll Special
By Arya Roshanian
The 'Reasonable Doubt' Cast Includes A 'Save The Last Dance' Reunion
By Grace Wehniainen
'Elite' Season 6 Is Arriving Sooner Than You Think
By Gretchen Smail and Grace Wehniainen
Nicola Coughlan Shared A Lady Whistledown Excerpt From ‘Bridgerton’ Season 3
By Grace Wehniainen, Alyssa Lapid and Sam Ramsden
Get Even More From Bustle — Sign Up For The Newsletter