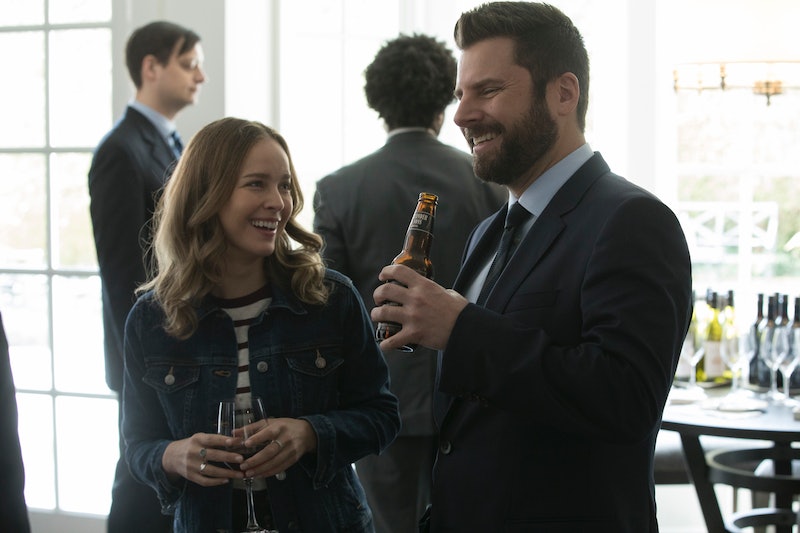 ABC’s new drama A Million Little Things is very much about a group of friends and lovers trying to come to terms with the tragic and untimely suicide of Jon, the nucleus of the pack. Jon, Gary, Rome, and Eddie met when they were stuck on an elevator, and they, along with their wives, quickly became the best of friends. But there’s one person in the group who’s brand-new, and she’s kind of inserted herself into the midst of this tragedy. Quite easily, I might add. So did Maggie know Jon on A Million Little Things? Because it's sort of odd how she just "shows up."

Viewers met Maggie in the pilot episode of the show when Gary, a breast cancer survivor, went to a breast cancer survivor support group and met Maggie, a therapist and fellow survivor. They quickly took to bed, which turned into Gary bringing Maggie to Jon’s funeral and memorial service back at his house. His friends all seemed to know Gary’s M.O. of bringing women from the support group around, but Maggie is different. Maggie fits right into the chaos. She’s a therapist who specializes in depression, and I don’t know if that was just her in, but maybe it made the group feel comfortable around her. Maybe she could shed some light onto why Jon decided to end his life.

But Maggie has secrets of her on. Later, we learned that Maggie isn’t a survivor — she is still sick and has stopped cancer treatments. She’s also fled from whence she came, because her apartment is still covered in boxes of stuff, three months after moving. Stuff that she does not want anyone to touch. Gary made fun of a stuffed panda in one of these boxes, and Maggie lost it, telling Gary to, “stay out of my stuff.” Maggie’s mysteries don’t stop there — when her ex, Tom, comes to Boston to tell her that “everyone” is worried about her, Maggie says that she shouldn’t have “left like that” but she doesn’t know if she can be what everyone wants her to be. “Cancer is not the worst thing that ever happened to me,” she tells her ex. “I want you to know I didn’t leave you. I left the old me.” Oh, shoot, girl.

Maggie is comfortable in this group probably because this is a group of people with a lot of secrets, and she has plenty of them, too. What’s more is that they have no idea who she was before this, so she doesn’t have to explain anything to them. Since Maggie came from at least a plane ride away from Boston, it’s doubtful that she knew Jon. But perhaps the group has come to depend on her because, in a time of such great upheaval, we can all use a steady person in our lives.

Maggie has become Gary’s de facto “we’re just having fun” girlfriend; Delilah and Regina’s friend; and Rome’s therapist; all within a few weeks. She is at the Dixon house with Delilah and her children when Gary isn’t around. Whether it’s that Maggie is a calming influence or the fact that she’s a therapist who has lived through cancer and seen much worse than this, she’s in with the group now. And because Jon said that everything always happens for a reason, Maggie’s entrance in the group could also force her to deal with her own personal demons on A Million Little Things.