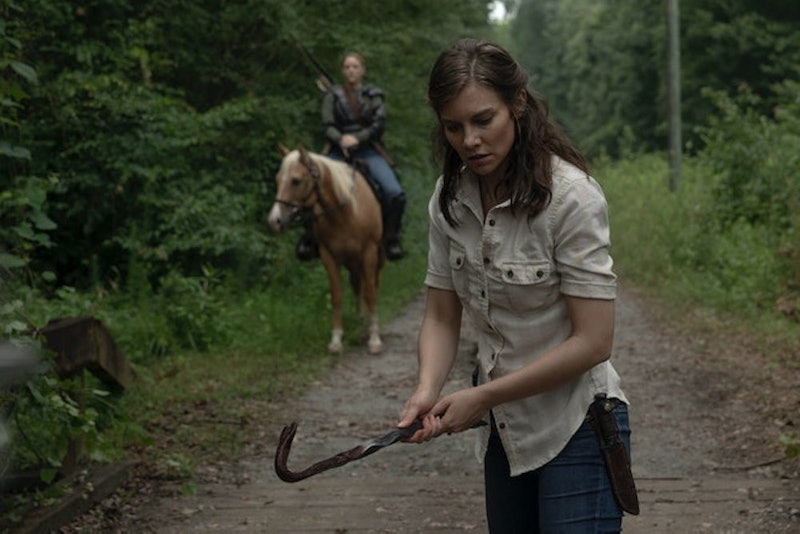 Warning: spoilers for The Walking Dead Season 10 ahead! Sunday night's episode of The Walking Dead may not have been the actual Season 10 finale — which has been pushed back to an unknown air date in the wake of coronavirus — but it certainly gave fans plenty to look forward to when that day actually comes. Including Maggie's long-awaited return to The Walking Dead, which could end up happening just when Hilltop, Alexandria, Oceanside, and the Kingdom need her the most.

Though she never appeared in the actual episode itself, a trailer that aired shortly afterward showed a glimpse of Lauren Cohan's beloved character and teased how she'll come back into the main storyline. In the clip, Father Gabriel is shown comforting a scared little girl, who doesn't think they stay much of a chance again the horde of zombies currently knocking at their door. Gabriel reminded her that their numerous groups — Alexandria, Hilltop, Oceanside, and the Kingdom — help turn their unimpressive fingers into a mighty fist when brought together. But who makes up the fifth (and thumb) portion of that weapon?

“The others," Gabriel said. "The ones that aren’t here, those that might find us help.” During his little speech, the camera cuts to those still on the outside, such as Virgil, who arrives to an empty Oceanside, as well as Eugene, Yumiko, Ezekiel, and Princess. And, last but certainly not least, Maggie, who reads a letter begging her to come back and help them.

As for where exactly Maggie has been all this time and when, exactly, she'll make her grand return, showrunner Angela Kang promises that those answers are coming very, very soon. "We'll see that Maggie is... We'll know what's happened with her and what that means for our group," Kang told Entertainment Weekly during a recent interview. "And our people are obviously on this collision course with the Whisperer horde. We will see Beta doing his thing as the leader of the Whisperers, hell bent on his revenge."

If there was ever a time Maggie's presence will be needed, it's now that Beta's army of walkers and Whisperers are once again on the attack, and this time Hilltop doesn't have hometown advantage. They don't have the supplies or the means to fight all of them off for too long. They need help — and having their former leader back could bring them one step closer to victory.

Cohan hasn't appeared in a Walking Dead episode since Season 9, which saw Maggie taking baby Hershel away to help build new communities with Georgie. One can only hope that now she'll be able to use those connections she's made throughout her time away to help bring Beta and his followers to their knees once and for all.