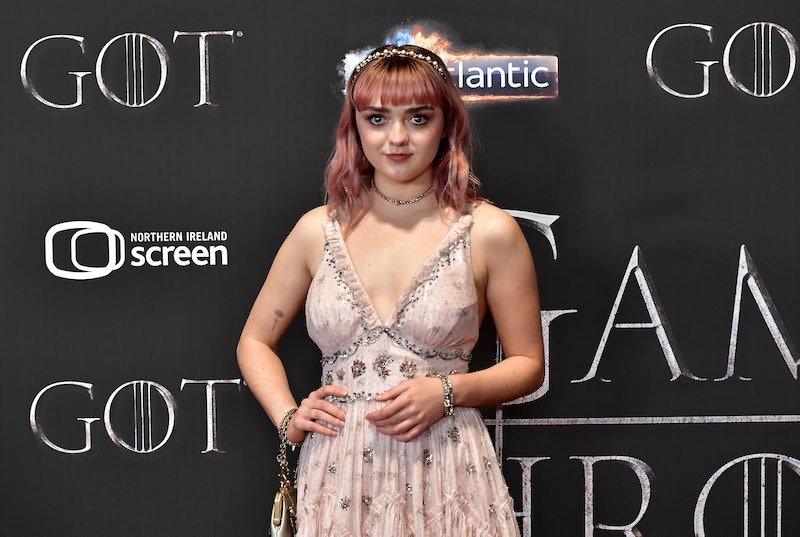 Game of Thrones is officially over, but the stars of the series are still around and moving on to new project. According to Instagram, Maisie Williams' blonde hair may just be the way she's choosing to move beyond the hit HBO series.

On April 19, the day of the Game of Thrones finale, Williams took to her Instagram account to showcase a fresh new dye job, and this time, the actor behind fan favorite character Arya Stark went blonde. Before you start drawing comparisons' to cast mate Emilia Clarke's hair while she portrayed Daenerys Targaryen, Williams didn't quite go Khalessi blonde. However, the change is pretty major for the star despite already having a multitude of hair changes since filming for the last season of the show ended.

In the photo posted to Williams' account, the actor is looking straight at the camera with her new blonde 'do. Her bangs and the long bob she's been rocking appear to the be the same, but her hair looks lighter than it was even a few days prior on her Instagram account.

Williams' new look features a darker shadow root, and the blonde itself is more of a golden color than a Khalessi platinum. Regardless of the shade, though, the new color looks great on Williams.

Could Williams' lightened hair be a sign that she's going to keep going progressively more blonde, though? The actor hasn't mentioned anything about wanting to get to the famous Khalessi color, but in photos previous to her latest blonde look, her hair has a more red tone that could suggest that she's going through a safer, slower change to protect her hair.

Of course, Williams' new 'do could just be another new look for the Game of Thrones star. If you haven't been following her on social media, you may have missed that she seems to have a penchant for rocking different colors.

Williams' first color post Game of Thrones was a perfectly bright shade of pink that looked so good on her. According to her Instagram account, Williams actually rocked the color for a few months before switching it up again, even wearing the pink hair on the cover of Rolling Stone with cast mate Sophie Turner.

For the American premiere of Game of Thrones, Williams switched up her hair again. She was rocking a cool lavender for the night.

The purple was fairly short-lived, however. For the Belfast premiere of the show, Williams was back to a pink-toned look.

Clearly, Williams loves a good hair color change, so could she be going Khalessi blonde next? Only time will tell. However, regardless of what color the Game of Thrones actor is rocking, she does it well. From pink to purple to blonde to her natural dark locks, seeing what Williams will do next is kind of major. Now that she's free from the role of Arya Stark (and the character's brown hair), the sky is the limit for whatever hair color Williams wants to have next.