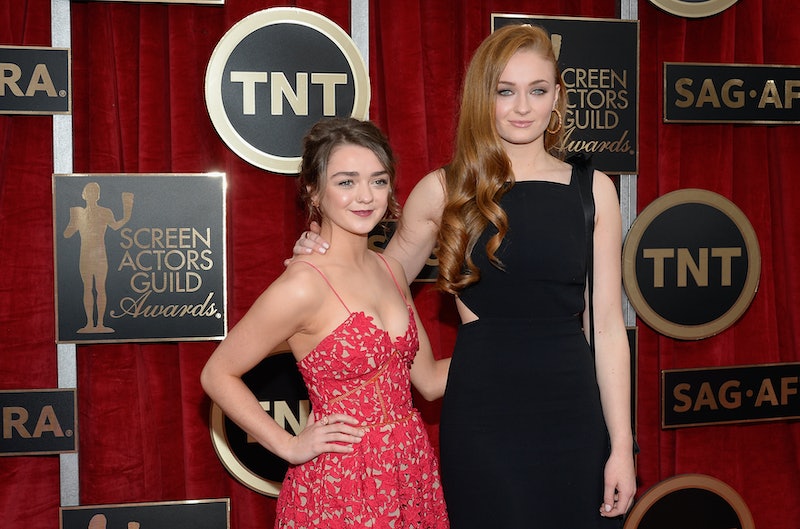 Most of the Game of Thrones cast have signature looks thanks to their characters. From Emilia Clarke's blonde hair to Kit Harrington's Jon Snow beard, the actors tend to look their characters IRL. However, on the cover of Rolling Stone, Maisie Williams and Sophie Turner look nothing like their Game of Thrones characters, but these two still looking incredible gracing the front of the magazine.

For the cover, Williams and Turner are still giving Game of Thrones fan sister vibes. Williams stands in front of Turner while the taller of the two embraces her from behind. Honestly, the cover is so cute with the pair back to their real life looks thanks to the end of the series.

Williams, who has had uniquely colored hair before, is rocking a pastel pink hue complete with blunt bangs that fall just above her brow. While the length of her hair is basically the same as her character Arya, that's where the similarities end. As for Turner, her red hair is gone, and she's back to rocking blonde, a color she's returned to before when not filming Game of Thrones. Unlike Sansa's locks, Turner's hair falls just below her shoulder, not down her back like the famous red head's.

While the pair may not look like sisters Sansa and Arya Stark any longer, Williams and Turner's interview with the magazine makes it clear they're practically sisters in real life. According to Rolling Stone, the pair met while auditioning for their GoT roles when Williams was 12 and Turner was 13. Speaking to the magazine, Turner explained that their chemistry read for their roles solidified their friendship. "We were pretty much best friends from that second on," Turner said.

Fans of Williams and Turner won't be surprised to hear this from the pair. Both women often talk about their friendship, and perhaps one of the sweetest stories about their relationship happens to be when they auditioned for Game of Thrones. If you follow the two on Instagram, you'll see posts from them both celebrating Aug. 7, and no, it's not either of their birthdays. It's actually the day they auditioned for Game of Thrones together.

Their Instagram celebrations, however, aren't the only way the pair commemorate the day and seeming start of their friendship. Williams and Turner also have matching tattoos. Their ink, done in red, reads, "07.08.09," the European notation for the Aug. 7 date in their Instagram posts. So cute, right?

Of course, who could forget when the pair were the cutest friends on the 2017 Golden Globes red carpet? Like the good friend and fictional sister she is, Turner helped Williams display her dress while posing on the carpet. That's real love and support.

While Turner and Williams look nothing like their Game of Thrones characters on their Rolling Stone cover, it doesn't really matter. All men must die in Westeros after all, thankfully, though, this friendship seems like it will live on long past the end of the series.