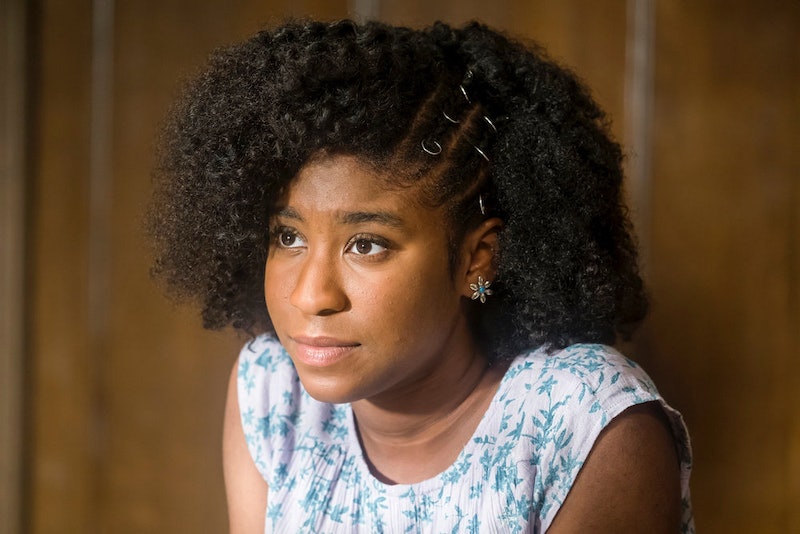 Spoilers ahead for This Is Us Season 4. Deja may have thought she was in for a fun new relationship when she met and and started flirting with Malik on This Is Us, but viewers know that Malik has a big secret that could put a strain on any potential he's building with Deja. In the preview for Season 4, Episode 3, Malik looked like he had something serious to talk to Deja about, and — if it's about what fans think it is — Malik and Deja's relationship on This Is Us is about to get so complicated.

Malik has a baby daughter that he appears to have sole custody of. And, while his parents are helping Malik out by watching his daughter while he goes to school and the occasional social event, Malik is very much responsible for her care. He's so committed to his daughter doing well in life that he tried to seek out some underhanded, but higher paying work to better provide for her. (He was steered away from that path... for now.)

It may not be a secret around town that Malik has a kid, if only just because he seems to love her so much and be really proud of her. He might not want to keep her a secret. But, if the other kids at school know, that means Deja will soon too. The Episode 3 promo hinted as much with Malik approaching Deja and asking, "Did you hear anything about me at school?" Deja just gave him a look of concern.

Creator Dan Fogelman has said that the Deja and Malik storyline will continue for a while, with Episode 7 being a spotlight episode for the couple. So whatever conversation they have in Episode 3 seemingly doesn't get in the way of them continuing to build a relationship.

"Obviously we didn't build up this character and that family to just have him be a guy Deja met once at a barbecue. He's going to play a big part in Randall's family's story — and Deja's story particularly," Fogelman told Entertainment Weekly, adding:

"We have an episode coming up where it combines the families [Malik's and Deja's], and it's interesting and it plays in socioeconomics and it goes into parenting and it goes into Randall's origin story. The basic, simple fact of his daughter becoming interested in a young man who has a child and what that might do to Randall and Beth .... it's one of the things I'm most excited about for our series this season."

If Deja does find out that Malik is a father, she may respect that he stood by his daughter — since her own biological father did not. Malik's truth doesn't necessarily spell the end of their budding relationship. Fogelman hinted to The Hollywood Reporter that some cute things are coming for the duo, whom actor Asante Blackk (who plays Malik) has already affectionately named #Dejik. (Although, some fans have argued for #Maja.)

"For the kids [Malik and Deja], there's stuff coming that is so romantic and I'm so excited about it just purely watching these two. We can't get enough of them," Fogelman said to THR.

Even if Malik and Deja have a hard conversation in Episode 3, it likely won't derail this relationship before Randall's had a chance to try to derail it himself in the name of looking out for Deja. This show has to milk all the drama before any resolution (good or bad) can be come to for this couple. So, if Malik spills his secret to Deja, don't expect her to go anywhere just yet.