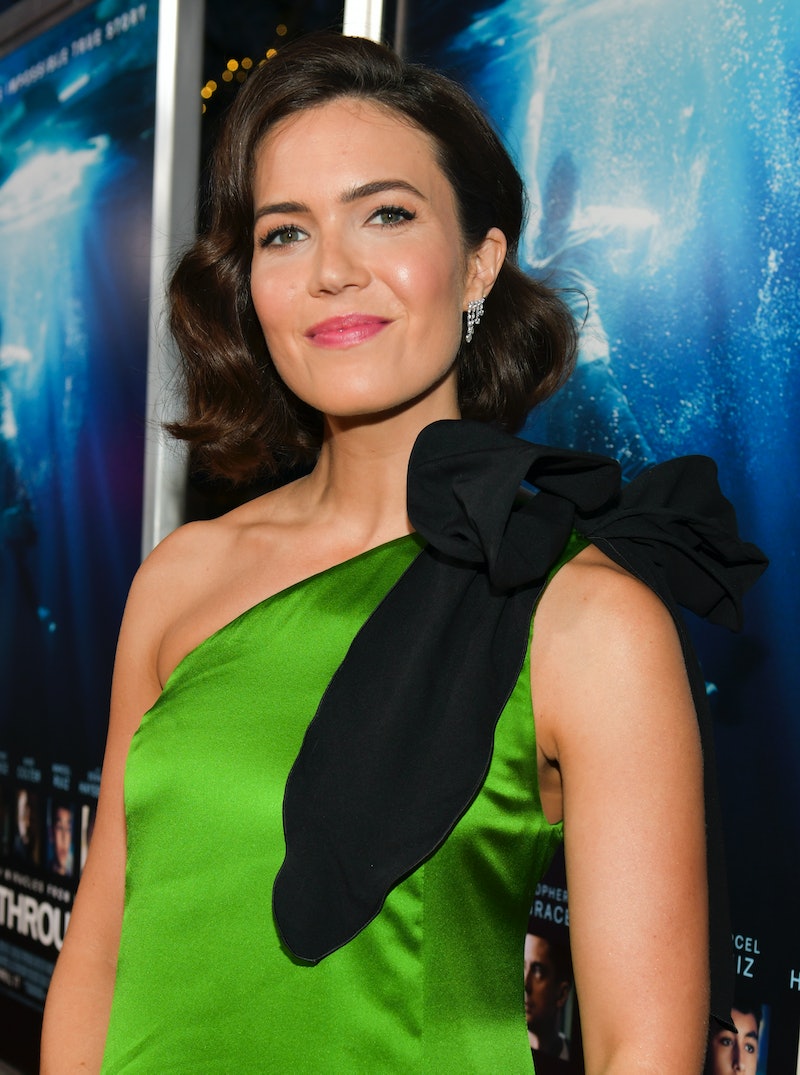 For anyone who enjoys Mandy Moore's musical performances on her hit NBC show This Is Us, more songs from the star are on the way. At a This Is Us FYC Event in Los Angeles on Thursday, Moore opened up about new music and discussed collaborating with her husband, Taylor Goldsmith, who fronts the indie band Dawes. According to Moore, he's helping her create her first album since 2009.

"I'm happy anytime we collaborate, we sing together and play together at the house all the time," Moore revealed to People. "Working on my music and being in the studio, it makes me emotional to think about it." She referenced her musical hiatus by adding, "It's been a really long road. I couldn't be more thrilled that it's happening and he's a part of it. It's so special."

Fans who follow Moore on Instagram also got a peek into her new album Thursday. She posted a series of photos from the recording studio as well as a song preview. "In the middle of making new music with some of my favorite people ever (@themikeviola, @dawestheband, @taylordawesgoldsmith, @herbadams)," Moore captioned the post. "Can't WAIT for you guys to hear what we're cooking up.... (photo) by the great @jonny_stills," alongside musical note emojis.

Moore also told People why co-writing with Goldsmith, who she married in November 2018, was such a special experience.

"I was singing in the booth last night," Moore began, "I looked over and he had his eyes closed, playing the guitar. I thought there's nothing cooler than being able to collaborate in this sort of setting with somebody you love, trust and respect, in the way that I respect him. He's the most talented, having him grace any music that I'm a part of is always a treat."

However, this isn't the couple's first time working on music. Goldsmith co-wrote "Invisible Ink," a song Moore's character Rebecca sings in Season 3 of This Is Us with series composer Siddhartha Khosla. They performed the song at Thursday's event and revealed more about Moore's upcoming album.

The Tangled star said she will probably take a break from recording the album, as production on Season 4 of This Is Us starts in "a couple of weeks," per Variety. "We'll hopefully keep recording through the summer and maybe have a song or EP out in the fall and then a (full) record early next year," Moore shared with the outlet, adding that "California pop" will be a major vibe of the set list.

"It's been really inspiring to just get to watch her and know what she wants and chase after it," Goldsmith told Variety about working with his wife, adding, "and with me with a guitar in my hands, to be able to help in some small way. I'm really happy that it's finally happening."

But fans who are hoping for an album reminiscent of "Candy," one of Moore's biggest hits, which is celebrating its 20th anniversary, shouldn't hold their breath. Moore told People, "I'm proud of that bop! It's the reason that I’m standing here today so I don’t begrudge it." She continued, "It's not my cup of tea. I don't think the new music is going to sound like that. But I love that sweet 15-year-old Mandy that sang it. She didn't know what she was doing but she was very proud and happy to be there. It's a fun song!"

One thing the world can agree on: we've missed Mandy's music like "Candy" and it's exciting her new hubby is helping her craft a new album.