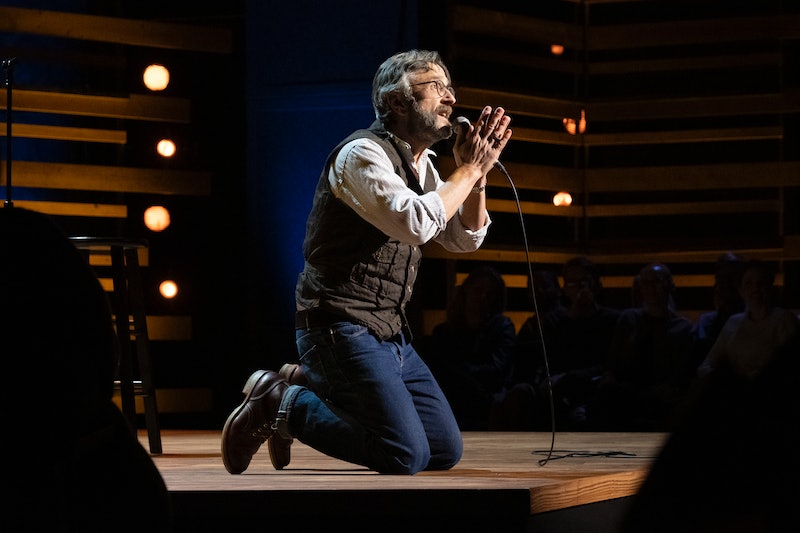 In his Netflix comedy special End Times Fun, Marc Maron's convinced that the world is burning down. The good news, at least as he sees it, is that it's all our fault. We stopped vaccinating our children and saw too many Marvel movies instead of films that would challenge us. When we say “we did everything we could” to prevent the climate apocalypse, Maron jokes, what we mean is that “we brought our own bags to the grocery store.” But if we caused the planet’s untimely death, then there’s no real justification for outrage. Maron, 56, is panicked, but resigned. Listeners of the prolific podcaster’s interview series WTF with Marc Maron will immediately recognize the familiar key of Woke Curmudgeon.

“There’s an argument to be made that most point-of-view comics are complaining, really,” Maron told the LA Review of Books podcast in 2013. “I mean, self-deprecation and complaining are relatively similar.” Maron focused on this kind of stand-up for years before finding his radio niche doing liberal political talk-shows for Air America. But it’s WTF, launched in 2009, where Maron crystallized the persona of his “mid-level celebrity” (his words): the “old professorial type” or “the wacky, aggravated uncle” (also his words). “It’s no easy game to come into who you are at 49-years-old and start finally being relevant to people,” he told LARB.

But if late maturation into your comedic voice is the burden, then the benefit is a certain fit that comes only when you’ve tried on and discarded the versions that didn’t work. The impact of technology on the quality of modern life isn’t a new sandbox, for example, but Maron digs in with more earnest nostalgia and less pandering than most comedians. The answering machine and the cassette deck and waiting in the checkout line with no phone to pass the time aren’t experiences he expects his audience to miss. Most of his broad audience, he acknowledges, are too young to even remember them. But they are bygone moments of human existence that appear to genuinely preoccupy him. Take the “if you’d like to make a call, please hang up and try again” message that used to play when a caller stayed too long on a dead telephone line. “What happened to that guy? I don’t know,” Maron speculates. “Can’t be a good story.”

Can’t be a good story is End Time Fun’s vague if menacing thematic through-line. Maron doesn’t have a specific idea of how we all die, but he trusts that the existential ennui in his gut and the California wildfires and the revival of once dormant diseases like the Measles will add up to something bad. The silver-lining is that it’s too late to do anything about it. So why bother? Unlike more ambitious political comedy specials of the last few years, like Hannah Gadsby's Nanette or even Michelle Wolf’s Joke Show, Marc Maron’s End Times Fun doesn’t challenge audiences to evolve themselves. It’s too late for that. Iron Man isn't coming to bail humanity out. And if doomsday is finally upon us, isn’t it nice to just sit back and watch something that rationalizes away any last-ditch impulse to self-improvement?

More like this
Here’s Everything Coming To & Leaving Netflix In February
By Jake Viswanath
Netflix Shut Down 'Bridgerton' S3 Rumours About A “Very Dark” Storyline
By Bustle
Everything To Know About A Potential 'Lockwood & Co.' Season 2
By Gretchen Smail
All The ’70s Easter Eggs You Missed In 'That ’90s Show'
By Grace Wehniainen
Get Even More From Bustle — Sign Up For The Newsletter
From hair trends to relationship advice, our daily newsletter has everything you need to sound like a person who’s on TikTok, even if you aren’t.