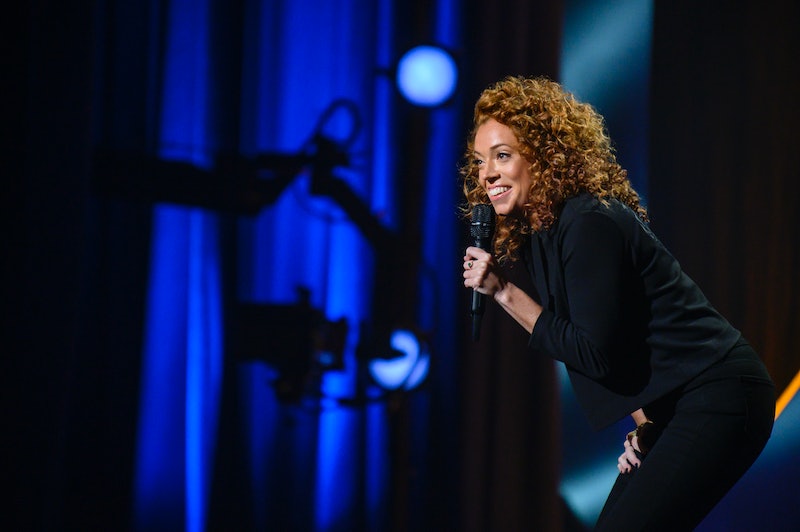 It’s become de rigueur for comedians to take on the political bugbear of outrage culture, and Michelle Wolf opens her new Netflix special Joke Show playing that same familiar note: “It seems like over the past couple of years we’ve developed this amazing ability to get mad at anyone for any reason.” But unlike comics who have made waves fighting the fight against "wokeness" recently— Dave Chapelle, Louis CK, and Shane Gillis included — Wolf offers a nuanced take. Where her peers see snowflakes ginning up fake controversy, Wolf acknowledges real injustice. Outrage is a problem when it distracts us from that, so please let her Instagram sea otters in peace, even if you’ve read that sea otters are rapist monsters of the sea. “It’s not like I was posting photos of Kim Jong Un being like, ‘He seems like a fun guy!’”

If there’s a through line to the wide-ranging comedy hour that follows, it’s that Wolf spends it confronting liberal orthodoxies from inside the liberal viewpoint. In a bit about equality between the sexes, for example, she urges feminists to stop insisting that women are just as strong as men, then dares to grab the hot third rail of American sports: Serena Williams. “The best women in the world at tennis are not as good as the best men,” she says, her high-pitched rasp it’s own exclamation point. Wolf doesn’t need to straw-man liberal arguments to turn them into punchlines, she just reframes them. “The reason we haven’t had a female president isn’t because she couldn’t do enough push-ups.”

Only briefly does she directly address the fallout she faced after her 2018 White House Correspondents' Dinner performance, in which Wolf compared former press secretary Sarah Huckabee Sanders to Aunt Lydia from The Handmaid's Tale. While some heralded her for using the very public moment to speak truth to power, she was rebuked by Republicans, as well as event organizers. (“It didn’t pay well,” she quips.) A few months later, her weekly Netflix series was cancelled.

She mentions Trump by name once, but other than that, Wolf eschews explicitly partisan politics in favor of speaking from and to the left. Her jokes on abortion challenge pro-choice supporters for talking about the procedure with the same sensitivity that a pro-life supporter might. She uses the well-worn trope of imagining a world where the burdens of womanhood, like menstruation and childbirth, fall on men not to admonish them but us: “I think as soon as a man got his period, we’d be like, “Get in the shed, Kevin...you’re very leaky.”

Wolf knows better than most that there’s no such thing as a universally funny joke. Comedy has always been about tribes: groups of people willing to laugh at the same thing, which is too often a different tribe. During the hour, she makes the point that the existence of sexism can't absolve women of the things they do wrong. It's the same point Wolf can be seen to make implicitly about liberals throughout Joke Show, as she riles her own tribe with the verve she brought to Washington D.C..

More like this
The Black Lotus Staff Has "Had Enough" In The 'White Lotus' Spoof From 'SNL'
By Brad Witter
Darren Harriott Is Keeping His Love Life Away From The Spotlight
By Darshita Goyal
Man Meets Politics: ‘Boy Meets World’ Star Ben Savage Is Running For Congress
By Jake Viswanath
24 History-Making Black Women You Probably Didn't Learn About In School
By Ayana Lage and JR Thorpe
Get Even More From Bustle — Sign Up For The Newsletter
From hair trends to relationship advice, our daily newsletter has everything you need to sound like a person who’s on TikTok, even if you aren’t.