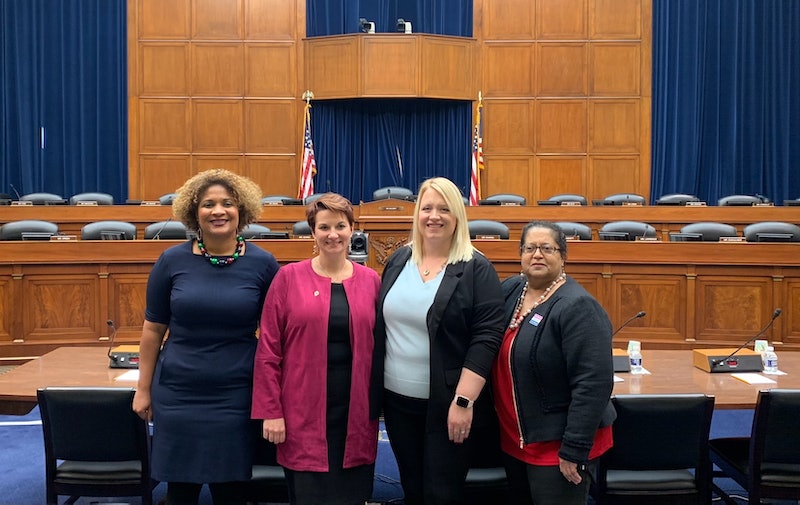 In this op-ed, Marcela Howell, founder and president of In Our Own Voice: National Black Women's Reproductive Justice Agenda describes her experience of testifying in front of the House Committee on Oversight and Reform in support of abortion access. The Nov. 14 hearing at which she spoke was sparked by the disclosure that Missouri's health department tracked the menstrual cycles of Planned Parenthood patients, and discussed other states' efforts to undermine access to reproductive healthcare.

I first heard about the Missouri Health Department’s actions against pregnant people when they were trying to not renew the license of Missouri's last abortion clinic. Everyone knows when you go in for an abortion, you get a pelvic exam; what the department decided was that people needed to have one before that, which is actually just abuse. It was not until later that we got the information that the department was also tracking women's periods, which is just outrageous. It really hits you in the gut when you think about these women who are looking for an answer to their pregnancy and they find out that there's a man in an office who is tracking every day of their lives. When you first hear it, you really don't believe it. You go, "But this doesn't make any sense.” This is something that we should be on our toes about watching, not just in Missouri, but in other states that are run by very conservative elected officials who think that they have the right to invade women's privacy.

This was the first time I’ve testified before a House committee. In Our Own Voice is five years old and we've been doing a lot of work on a lot of different issues. Our Vice President of Government Affairs, Jessica Pinckney, got a call from the committee staff asking if I might be interested in testifying. Both of us were on the road at the time. It was less than a week between them calling us and the committee hearing. Jessica wrote up an outline and we worked together to come up with the testimony, which had to be five minutes long. Once you give your statement, you wait to see who's going to ask you questions, and you hope they’re questions that you going to have the answer for.

I was seated next to Allie Stuckey, who was the opposition witness. We knew that the opposition, the conservative republicans, would throw everything they had at Dr. Colleen McNicholas, Chief Medical Officer of Planned Parenthood of the St. Louis Region and Southwest Missouri, the state's last abortion-providing clinic. Dr. McNicholas was so good.

I was asked a question about Medicaid recipients, and what happens when you use your own insurance to cover a legal medical procedure. I spoke about what we have heard from people about what they have to go through to access care. If they're living in a state where there's only one clinic, how do they travel there, what do they do about child care, what do they do about taking time off work? If they have these mandated counseling sessions that they have to do, it means that you have to go see the doctor first and get counseling. Then you make your appointment, which means you have to take off time twice. And if you have to travel long distances, you're taking off maybe two days each time. And for some of these women who work hourly jobs, that means they're losing pay, and the pay that they're getting is going to child care and travel costs.

The Hyde Amendment, which prevents federal funds being used to pay for abortion services, is just one piece of these barriers, but when you add to it the reality of how many times you have to see the doctor, unnecessary pelvic exams, restrictions like hospital admitting privileges when hospitals often won’t give these privileges, all of these add up to prevent people from accessing abortion care. And that's all it is.

This is not a man or woman thing. These are identities that we may not always lift up and that we should.

It's just so insidious that people really think they get to control women's bodies that way. If they didn’t believe they had the right, we wouldn't have these barriers in the first place. That's why our organization concentrates on access, because we know for low-income people, for people who live in rural communities, for LGBTQ people and young people, these barriers are even greater. For trans and gender nonconforming people, there's already a fear of seeking medical help because people seem to think they don't get pregnant — they do. Dr. McNicholas also spoke to this.

I felt I had to list out all the people who have to face these barriers because they literally are all of us. So many of us have more than one identity. It's really important to me that we acknowledge that this is not a man or woman thing. These are identities that we may not always lift up and that we should.

I want people to come away feeling that they are empowered to make these decisions themselves. That abortion is still legal in this country, no matter what state they're living in and no matter what they've heard. I also want them to be empowered to mobilize around keeping women’s privacy and access when they’re voting for anyone, be it a state representative, a state senator, a congressional representative, or the president — find out where they stand on these issues.

What we are hoping will happen is that the House, the Senate, and the next president sign off on funding bills that do not have the Hyde Amendment attached to them. With the Helms Amendment, there is a global gag rule that providers can't even talk about abortion as an option with patients in other countries. We should not be telling people in our own country that they can’t access a legal medical procedure because of their insurance, and we most definitely should not be spreading that bigotry into other countries. That’s our longterm goal and we think that we can achieve it — not necessarily in 2020, but by 2021.

As told to Melanie Mignucci. This conversation has been lightly edited for clarity.

This article has been updated from its original version.