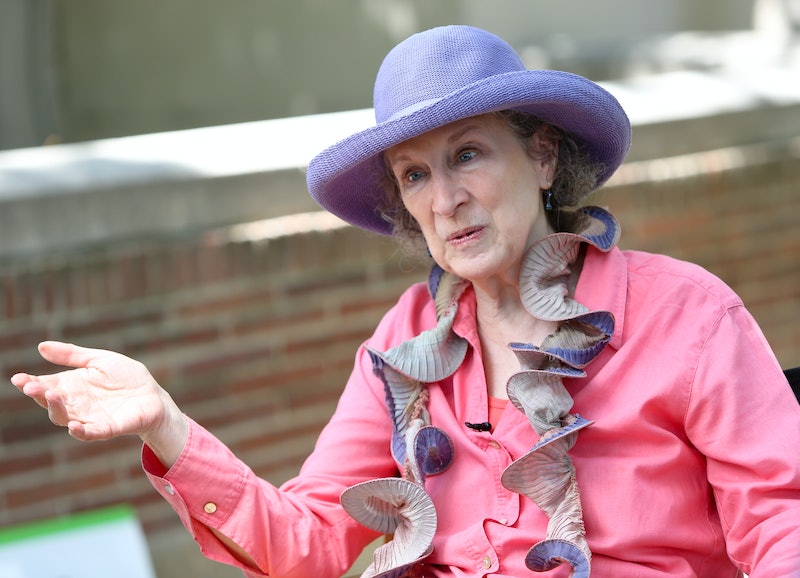 Anyone who's read The Handmaid's Tale will already know how powerfully this Canadian author can write about women's rights over their own bodies — but Margaret Atwood's comments on anti-abortion laws at BookCon still managed to blow us away all over again. Atwood was speaking at a panel at BookCon on Saturday, in which the discussion centered both around her 1985 novel and the Hulu The Handmaid's Tale adaptation. During the hour-long panel, Atwood spoke about a wide range of topics from East Berlin to adverts for period products — but she got the most applause when she spoke up against anti-abortion legislation.

The conversation began when a man from the audience asked Atwood about the fact it's now virtually impossible for a woman to get an abortion in Texas. Unsurprisingly, Atwood had a lot to say on this particular topic; after all, The Handmaid's Tale is all about a dystopian future in which women are classified and used based on their ability to bear a child. INSIDER released a transcript of Atwood's response, in which she demanded that if Texas make abortion illegal, they should be required to cover the costs of the pregnancy and of raising the child.

"Sometimes people have to live their dream. So if living their dream means a lot of dead women and orphans, maybe they're going to have to live that dream and maybe they're just then going to have to figure out, 'Who's going to pay for this?' Who's going to pay for the orphans and the dead women, because that's what you're going to have. And I'm waiting for the first lawsuit. I'm waiting, you know, in which the family of the dead woman sues the ... state and I'm also waiting for a lawsuit that says if you force me to have children I cannot afford, you should pay for the process. They should pay for my prenatal care. They should pay for my, otherwise, very expensive delivery, you should pay for my health insurance, you should pay for the upkeep of this child after it is born. That's where the concern seems to cut off with these people. Once you take your first breath, [it's] out the window with you. And, it is really a form of slavery to force women to have children that they cannot afford and then to say that they have to raise them."

Atwood then launched into a comparison with a Romanian law in the 1960s which, in the hopes of boosting population, outlawed abortion and contraception and required women to bear a minimum of four children by law. While the law did boost the population, it also increased the number of children in orphanages, and resulted in the deaths of many women who had illegal, and unsafe, abortions.

"So, [if] that's what you want state of Texas, live your dream. Then we can all watch and see what that looks like, and whether you're actually going to go as far as to force this upon women and families and not pay for any of it. If you're drafted into the army, the other situation in which the state seizes control of your body, at least you get three meals a day, clothing, and a place to sleep. So, if you're going to do that to women, pay up."

Atwood's deep understanding of the injustice of a state controlling women's bodies is why The Handmaid's Tale is such a powerful piece of writing — although it's pretty grim that we still have to fight these battles over 30 years after she originally wrote it. To listen to Atwood's statement on abortion laws in full, skip to 1:07 in the below recording.

More like this
Harry Styles Called For "Backlash" In Powerful Statement On Abortion Rights
By El Hunt
The 20 Best Audiobooks To Fall Asleep To
By Aoife Hanna and K.W. Colyard
What Is Barack Obama’s Net Worth? He Makes *Way* More Now As An Ex-President
By Hugh McIntyre
How The City Healed Five Years On From The Manchester Arena Attack
By Ella Glover
Get Even More From Bustle — Sign Up For The Newsletter