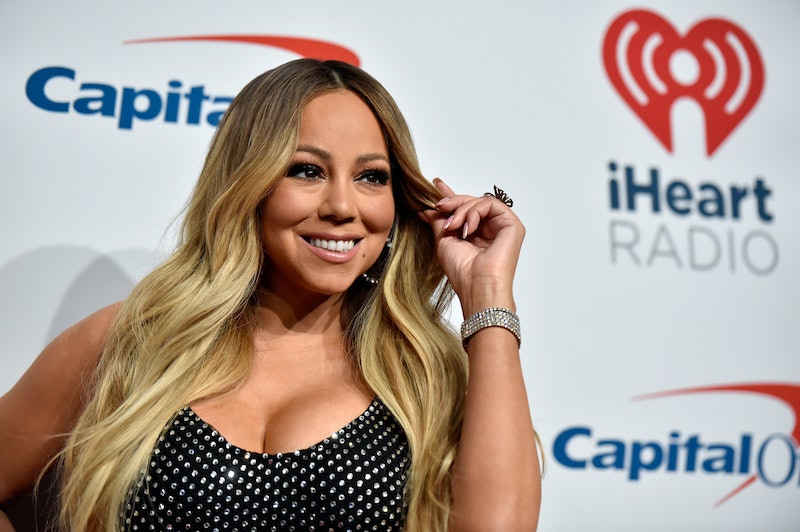 Lambs, you're going to love this. It's truly a blessing in editorial form, and, as always, your queen continues to be the gift that keeps on giving. Mariah Carey's latest interview with Cosmopolitan is straight-up packed with meme-able moments, but honestly, would you expect any less these days? It's basically her brand now.

Man, oh, man. Where to even begin? The cover, perhaps? Yes, let's start there. It pretty much sets the tone for the treasure trove of pure gold quote-ables that follow, and it absolutely, positively screams "Mimi" in every single way.

OK, so, Carey is the cover star for Cosmo's August issue, and naturally, she looks flawless. Per usual. No shocker there. Her outfit, though, is a work of art in and of itself. A-plus styling, for real.

First of all, she's wearing a crown. Yes, a literal crown. Lambs have long-bowed down to Her Majesty Of Octave-Climbing, but now the rest of humanity will finally be forced to recognize that Carey is, in fact, a true queen. The cover even says so: "All hail, Mariah," it reads. "Queen Of Whatever TF She Wants."

Carey opted to dress-down her crown with a simple, casual t-shirt, which, at second glance, isn't so simple at all. "Yes, that is her own face on her shirt," a teeny-tiny blurb confirms. To reiterate: Carey is wearing a crown and a t-shirt emblazoned with her own face on the cover of Cosmo. Suddenly everything feels right in the world.

Now for the interview. It is, at the same time, totally all over the place, and exactly what fans might expect it to be. Carey takes a sip of wine "with her literal pinky in the air," but then sends the bottle back. "It just tastes disgusting," she confessed. And the next bottle? "Not so great," she said.

When asked what the best birthday gift she's ever received was, she responds, "I don't have birthdays." It's true. She doesn't age. Want proof? Just take a look at her 10-Year Challenge submission.

She refers to the men she's dated as "a variety pack," called her first and second wedding dresses her favorite red-carpet outfits, dubbed herself a "prude," and at one point felt the need to make it abundantly clear that no, she was not wearing Spanx. "There’s nothing here but this knit dress," she said, referring to her body.

Pretty much everything Carey says or does on social media goes viral these days, and her interview with Cosmo proves no exception. Take, for example, her response to a fan @mariahlegend's tweet back in April that read, "Not even being dramatic but 'I don't like Mariah Carey' is literally the biggest turn off ever." Carey some how caught wind of it and responded with, "Same."

Then there was the time she went viral for her response to Always Be My Maybe, the time she blew up for confusing One Direction and The Chainsmokers, and most recently, when she had a seriously epic response to the Bottle Top Challenge. All hail Queen Mimi, Ruler of All-Things Internet.

All of these memorable Mariah moments just barely skim the surface of her greatness, though. So, do yourself a favor and scroll through her Twitter or read the Cosmo interview in its entirety if you've been left wanting more — while drinking a glass of wine with your pinky up, of course.

More like this
Ariana Grande & Kristin Chenoweth Sing A Wizard Of Oz Classic On TikTok
By Alyssa Lapid
Beyoncé & Blue Ivy Performed A "Brown Skin Girl" Duet At Her Private Dubai Concert
By Brad Witter
Will Beyoncé Perform At Or Attend The 2023 Grammys?
By Jake Viswanath
Taylor Swift May Miss The 2023 Grammys For Reasons Fans Know “All Too Well”
By Jake Viswanath
Get Even More From Bustle — Sign Up For The Newsletter
From hair trends to relationship advice, our daily newsletter has everything you need to sound like a person who’s on TikTok, even if you aren’t.