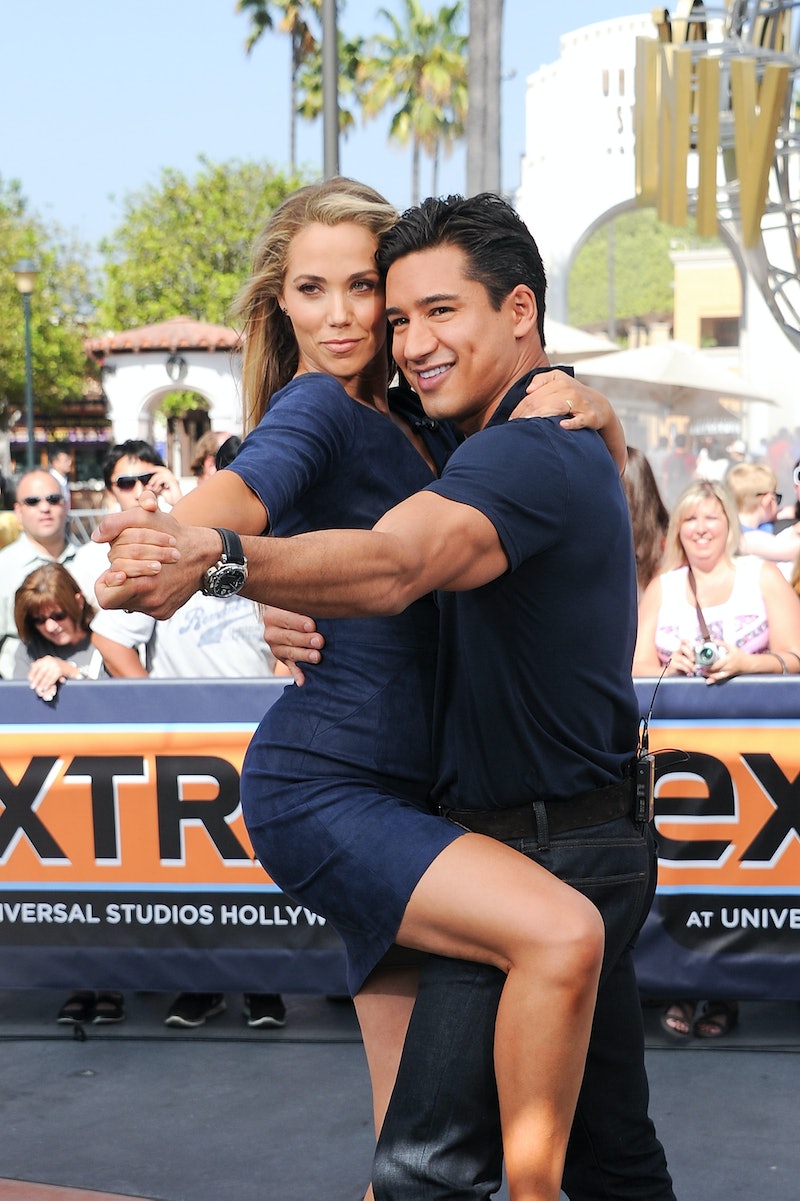 Get ready to be so excited that you just can't hide it. In honor of "fallback Friday," Mario Lopez shared a 'Saved by the Bell' reboot first look via Instagram on Friday, Jan. 10. His video featured his longtime onscreen love interest, Elizabeth Berkley (Jessie Spano, or "Mama," as he sometimes called her in the show) — but the nostalgia didn't end there. "Back at The Max..." the actor who played A.C. Slater in the classic '90s sitcom captioned the clip, which he filmed from the Bayside High crew's usual booth at their famed after-school haunt. Even "old school Max" (actor Ed Alonzo), made a quick cameo in the behind-the-scenes sneak peek.

As Lopez and Berkley explained in the former's IG post, they were all on set shooting a promo for the upcoming series for NBC's Peacock streaming service, which is scheduled to launch in April 2020. "Talk about being in a time machine," Berkley, who also joked she and Lopez "look the same," astutely remarked. "I feel like only people who've had the history we have could drop right into that."

NBC announced in Sept. 2019 that Saved by the Bell would get the reboot treatment with Lopez and Berkley reprising their roles from the show that aired from 1989 to 1993 and spawned multiple spinoffs and TV movies. Other original cast members included Mark-Paul Gosselaar (Zack Morris), Tiffani Thiessen (Kelly Kapowski), Lark Voorhies (Lisa Turtle), Dustin Diamond (Samuel "Screech" Powers), and Dennis Haskins (principal Richard Belding).

At the time, it was unclear if any others from the OG cast would also be part of the updated series, though NBC's Saved by the Bell logline seemed to indicate that would be the case. It read:

"When California governor Zack Morris gets into hot water for closing too many low-income high schools, he proposes they send the affected students to the highest performing schools in the state — including Bayside High. The influx of new students gives the over privileged Bayside kids a much needed and hilarious dose of reality."

After he first explained he'd read the revival news in the media like everyone else, Gosselaar eventually confirmed he will appear on the show, during a Jan. 8 Television Critics Association event. "Everybody can sleep well at night," the actor, who's currently starring on ABC's mixed-ish, told reporters, per Vulture. What's more, he added that Thiessen "has been engaged with" by producers. "It looks like you will have us in some capacity," Gosselaar announced. The Hollywood Reporter confirmed via sources on Jan. 9 that the actor will appear in three episodes and that Thiessen was "in talks" at the time.

Additional new Saved by the Bell cast members will include John Michael Higgins as Bayside High’s new principal, as well as Josie Totah, who will play "a beautiful, sharp-tongued cheerleader and the most popular girl at Bayside." Toah's role will be a big win for LGBTQ+ representation, as the actor came out as transgender in an Aug. 2018 essay for Time.

As much as things may change though, Lopez and Berkley's blast from the past has certainly proven that there will be plenty of nostalgia for '90s babies to bask in as well. After all, it now seems that Max isn't the only one with some magic up his sleeve. Stay tuned.

More like this
A New 'And Just Like That' Table Read Pic Confirms A Key Character's Return
By Jack Irvin and Grace Wehniainen
'That '90s Show' Star Callie Haverda Got Advice From Mila Kunis & Ashton Kutcher
By Brad Witter
Here’s Why Danny Masterson’s Hyde Isn’t In 'That '90s Show'
By Brad Witter
Man Meets Politics: ‘Boy Meets World’ Star Ben Savage Is Running For Congress
By Jake Viswanath
Get Even More From Bustle — Sign Up For The Newsletter