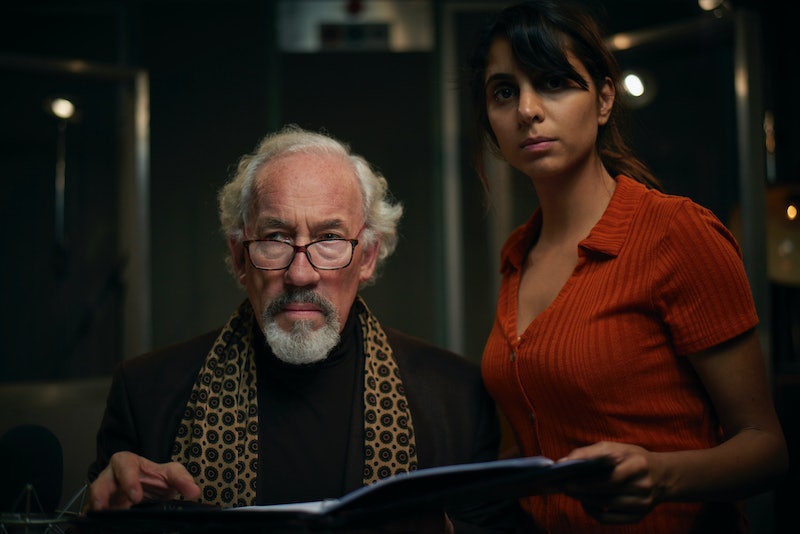 A show more horrifying than the scarf you got gifted in the office secret Santa is making its way to BBC Four this Christmas. Mark Gatiss' The Dead Room, which is as spooky as it sounds, is a ghost story set inside the dingy confines of a radio studio. It's more likely to give you nightmares than dreams of Santa, but if that's the kind of Christmas you're after this year, then this is the show for you. It's gritty, dark, and detailed, and it might remind you of some other shows. Mark Gatiss wrote and directed The Dead Room and it's not his first time behind the camera.

Gatiss was also the mastermind behind Sherlock, alongside his former Doctor Who writing colleague Steven Moffat. While The Dead Room is a lone writing venture for Gatiss, he's got another chilling project with Moffat in the works — their much-touted Dracula series. Shooting has yet to commence, as the Radio Times reported on Dec. 18, but The Dead Room will leave you with goosebumps to last through the indefinite wait.

Beyond spooking viewers out, or just keeping them entertained with a good, gritty mystery, Gatiss once belonged to the iconic comedy sketch group The League of Gentlemen, which is as surreal as it is side splitting.

So, it seems like Gatiss is the master of all trades — having successful comedy, drama, and horror projects all under his belt — but a ghost story set at Christmastime seems to be his particular niche. He might well be the modern day Charles Dickens. On Christmas Day in 2013, his adaptation of M.R. James' The Tractate Middoth — an early 20th century ghost story set inside a university library — aired as part of BBC Two's A Ghost Story For Christmas series, the Radio Times reported.

BBC Four is following suit this year, as The Dead Room was commissioned as part of the channel's showcase of some of Britain's best chill inducing writers, the BBC reported back in August. Gatiss' contribution was reportedly filmed at the legendary Maida Vale studios, and it's a meta and modern take on the traditional ghost story.

"Whatever happened to the classic ghost stories? The good old days?" the show's synopsis reads, as The Dead Room tells the story of a long-running horror themed radio show, which is losing touch with its listeners. Soon enough, the horror becomes all too real. You can catch it on Christmas Eve at 10 p.m. on BBC Four, and as Gatiss recently revealed to Digital Spy, he's had the idea for The Dead Room for a while.

Hailing from his days as a presenter for BBC Four Extra's The Man in Black, Gatiss told Digital Spy that "The producer was always asking me to write for it," he explains. "I had an idea for a story called The Dead Room, about me as the Man in Black, in this studio that was being haunted. It never happened, but I sort of filed the idea away..." Now it's finally here, and designed to keep you up long enough to see the light of Christmas morning.