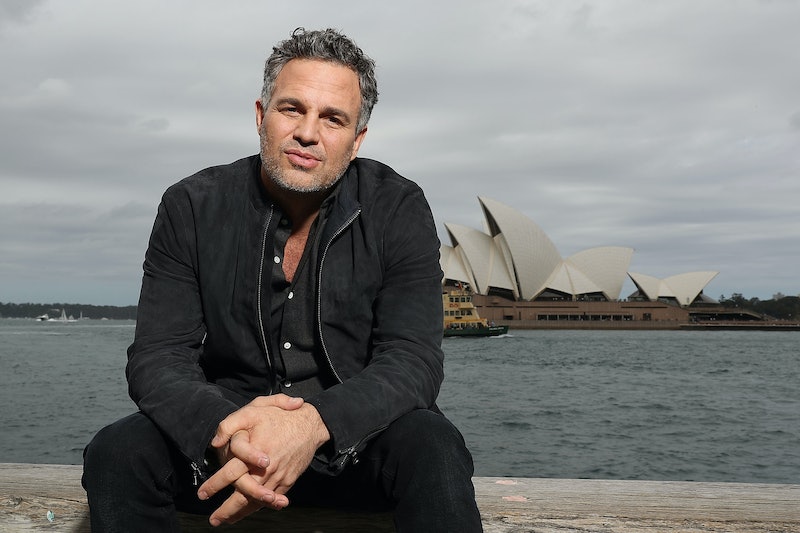 Not one to miss out on a political debate on Twitter, Mark Ruffalo criticized Ellen DeGeneres and George W. Bush's friendship in a tweet on Wednesday, Oct. 9. "Sorry, until George W. Bush is brought to justice for the crimes of the Iraq War, (including American-lead torture, Iraqi deaths & displacement, and the deep scars—emotional & otherwise—inflicted on our military that served his folly)," Ruffalo wrote, "We can’t even begin to talk about kindness." Along with his message, Ruffalo also included a link to an Oct. 8 Vanity Fair article that also criticized the comedian's plea to be kind with those that disagree with you.

Ruffalo's tweet comes a day after DeGeneres defended her friendship with the former president during the Oct. 8 episode of her daytime talk show. After video of the pair enjoying an NFL game in Dallas together over the weekend hit the web, many people on Twitter voiced their disappointment, with many pointing out Bush's opposition to gay marriage as a compelling reason not to socialize with him. During her monologue, she justified their relationship adding that she's friends "with a lot of people who don't share the same beliefs" and that her "be kind to one another" slogan means "be kind to everyone."

But DeGeneres' plea for kindness towards George W. Bush didn't sit well with audiences, including, it seems, Ruffalo. The actor waded into the ongoing controversy on Twitter, pointing to alleged "crimes of the Iraq war" as reason enough to forgo kindness towards the former president.

The alleged crimes that Ruffalo mentioned in his tweet likely referred, in part, to the Abu Ghraib prisoner abuse scandal, which took place during the Iraq war. The scandal included the discovery of "graphic photos depicting guards abusing detainees" at the US Army detention center for captured Iraqis in 2003, prompting an investigation that led to the conviction of 11 US soldiers, per CNN. In 2012, the Kuala Lumpur War Crimes Commission also found Bush guilty of war crimes for his 2003 invasion of Iraq, which the Commission said was "in violation of the United Nations Charter and international law," per Vice.

Meanwhile, the Vanity Fair article Ruffalo linked to pointed out a few other notable political decisions and beliefs that might trump any desire to be nice. For example, Bush fought to ban gay marriage, opposed classifying crimes against the LGBTQ+ community as hate crimes, and chose a FEMA head who "allowed thousands of New Orleans residents to languish in the Superdome without adequate food or water" in the wake of 2005's Hurricane Katrina.

Of course, despite all the detractors, there were many who supported DeGeneres' message of embracing people with opposing political views. Among the celebrities to comment favorably on DeGeneres' Instagram post about the football game she attended with the former president were Reese Witherspoon, Kendall Jenner, Jennifer Garner, Jamie Foxx, and Lenny Kravitz. Meanwhile, stars like Blake Shelton, Gwen Stefani, Dax Shepard, Kristin Chenoweth, and Kelsea Ballerini supported DeGeneres' post on Twitter. "This is exactly the way i believe and i love you even more," Chenoweth tweeted at the talk show host.

It seems that Hollywood remains as divided the rest of the country when it comes to how to interact with people of opposing views. And DeGeneres' call for kindness won't be changing that anytime soon.

More like this
Eurovision Has Been Given A Whole New Look Ahead Of Its Liverpool Debut
By Bustle UK
Melanie Lynskey Plays A “Ruthless Leader” In 'The Last Of Us'
By Brad Witter
The Full EGOT Winners List: Only Viola Davis & These 17 People Are EGOTs
By Radhika Menon, Marina Watts and Grace Wehniainen
What Is Mary J. Blige’s Net Worth? The 9-Time Grammy Winner Is Doing “Just Fine”
By Hugh McIntyre
Get Even More From Bustle — Sign Up For The Newsletter
From hair trends to relationship advice, our daily newsletter has everything you need to sound like a person who’s on TikTok, even if you aren’t.