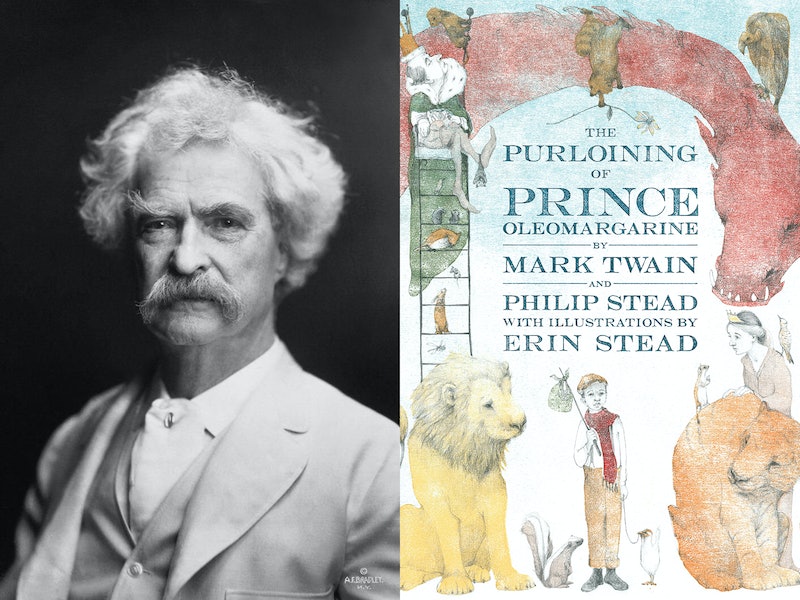 If you think picture books are just for kids, you're definitely missing out. These beautifully crafted books have become a mainstay in many adult home libraries for their gorgeous illustrations (many of them definitely coffee table worthy) and, especially these days, the sweet stories have messages and meaning that can transcend age. So when an unfinished fairytale by author Mark Twain, The Purloining of Prince Oleomargarine, was discovered, it was an exciting moment for book-lovers everywhere; and especially so when picture book phenoms (and Caldecott Medal winners for their celebrated picture book, A Sick Day for Amos McGee) Philip and Erin Stead were tapped to help complete it. Here's a treat: Bustle has an exclusive look at a gorgeous behind-the-scenes video that documents the monumental discovery of the manuscript, Phillip and Erin Stead's exciting journey to its completion, and just what went into its historic publication at Random House.

It is said that The Purloining of Prince Oleomargarine was born in a hotel in Paris one evening in the 1880s, when Mark Twain sat with his young daughters, who begged their father for a story. Choosing a picture from a magazine to get started, Twain began telling them the tale of Johnny, a poor boy in possession of some magical seeds, who finds himself on a quest to rescue a stolen prince. Later, Twain jotted down some rough notes about the story, but the tale was left unfinished... until now.

Twain's fairytale has been brought to spectacular life by the Steads, using 16 pages of the author's own handwritten notes as the basis for this new work. And though the tale reads like a classic, the explorations of charity, kindness and bravery in the face of tyranny carry with them a fierce heart and sharply drawn satire that will not feel out of place on any modern shelf.

This tale follows a young boy, Johnny, who eats the flower sprouted by a magical seed and gains the ability to talk to animals. Then the boy and his new animal friends go on a wild adventure to rescue a kidnapped prince. Though the story was never completed by Twain, it bears many of the hallmarks of his beloved style, with its humor and playfulness and the quest of a young boy navigating the adult world on his own.

Told in 160 pages over 11 chapters, the book is a combination of talent both classic and contemporary. Phillip and Erin Stead have completed the text and illustrated the book, interestingly framing the narrative as a story “told to me by my friend, Mr. Mark Twain,” and even including occasional interruptions by an imagined meeting over tea between Philip Stead and Twain.

The Purloining of Prince Oleomargarine by Mark Twain, $17, Amazon

It's an exciting moment for both readers everywhere, and of course, for both Steads who were more than ready and able to take on the job.

In a statement, Erin Stead says, "As an illustrator, not a writer, I can often use the excuse that I can’t find the right words to describe how I am feeling (stunned and honored being the closest and most generic). Luckily I can now turn to Twain, who is quite quotable, to provide a little context and inspiration: ‘I’m not the declining sort. I would take charge of the constellations if I were asked to do it. All you need in this life is ignorance and confidence: then success is sure."