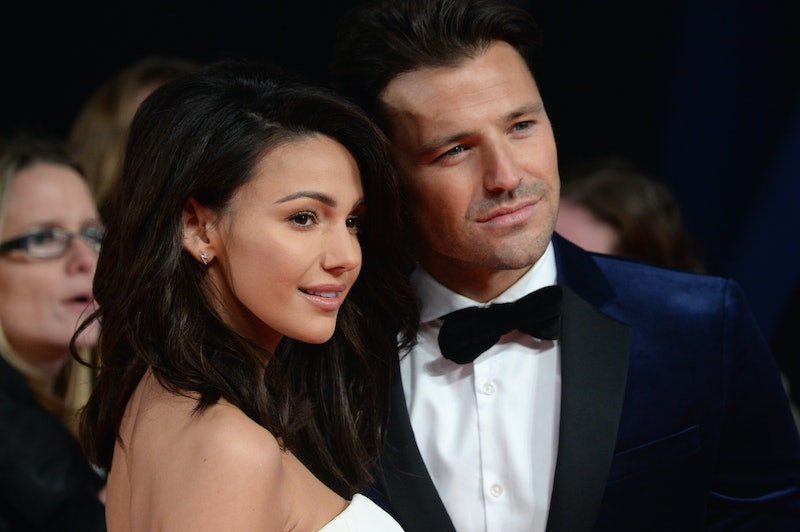 As excited as I am to see personal trainer Alex Marks begin his quest to find "the one" on The Bachelor UK tonight (March 4), I can't help but ponder over presenter Mark Wright. Not in the way you might think (though it's hard not to) — I'm talking about his own love life. The timeline of Mark Wright and Michelle Keegan's relationship is literal goals, and continues to grow stronger despite their individual TV schedules keeping them incredibly busy.

After Wright became a correspondent for U.S. entertainment show Extra and Keegan spent months filming for Our Girl in countries around the world, rumours began to circulate the the couple's relationship was on rocky ground. So much so that Keegan decided to address the comments head on, clarifying that the way they deal with being apart from one another is nobody's business but theirs. "Honestly, I promise, I don't even read about it any more," she told The Sun last September. "It's private and I don't care if someone thinks it's bad we've got different careers. Yeah, we have! And I'm proud of that."

I mean, who wouldn't be? Everyone should stan a couple who support each other in their separate endeavours, and this duo have been doing it for over seven years. With that in mind, let's take a look back at where it all began.

The couple first met by complete coincidence. While on totally separate holidays in Dubai, Wright and Keegan attended the same New Year's party, as the Mirror reports, and, yes, it sounds like something out of a movie. While Keegan and Wright didn't confirm their relationship until a year or so later, last December a photo surfaced of the two at said party and you can totally see a spark.

After a few months of speculation, the couple made their first official appearance together on the red carpet for the 2013 Soap Awards. As the Daily Mail reported, Keegan won Sexiest Female for the fifth time in a row that night for portraying Tina McIntyre on Coronation Street.

Taking place where they first met, the proposal happened while Wright and Keegan were on holiday in Dubai in Sept. 2013. As the Daily Mail reports, Keegan confirmed the news on Twitter, while also thanking fans "for all the lovely messages".

The couple spoke exclusively to Hello magazine about the deets of their engagement, and you better get the tissues on standby. "I thought he was joking at first and then he said come here. I started crying, and said yes, and then he started welling up as well," Keegan told the magazine. "Then as we walked further down the beach I saw a table set up with lanterns and petals, and two glasses of champagne."

As the BBC reports, the couple got married in Bury St Edmunds at St Mary's Church. In another exclusive with Hello, the magazine covered the entire day so you don't have to look far to cry over how beautiful — and so in love — Wright and Keegan were on their special day.

After the wedding, they decided to spend their honeymoon in the Maldives, according to the magazine. So jel.

As previously mentioned, due to Keegan's role on Our Girl and Wright's presenting work in the U.S., the couple soon found themselves seeing each other less and less throughout the year. As Wright explained in an interview on Lorraine last May, they "try and make sure it's three weeks maximum that [they] don't see each other" to keep their relationship strong.

Whether that was Wright visiting Keegan or the other way round, there were plenty of Insta snaps to prove that the two did find time to spend together.

While Keegan will most likely be filming for the fourth series of Our Girl soon, Wright has stepped down from his duties at Extra and has finished filming The Bachelor, so he's now moved back to the UK.

"Michelle was the reason I knew I would never move there forever. She's the best wife I could have dreamed of, the most important person in my life and the one who helped convince me to go to America in the first place," Wright recently explained in an interview with The Sun. "She always supported my decision and never once asked me to come home."

He continued: "When I told her, she cried with happiness. She was over the moon, but she didn't want to tell me that before because she never wanted the decision to be based on her."