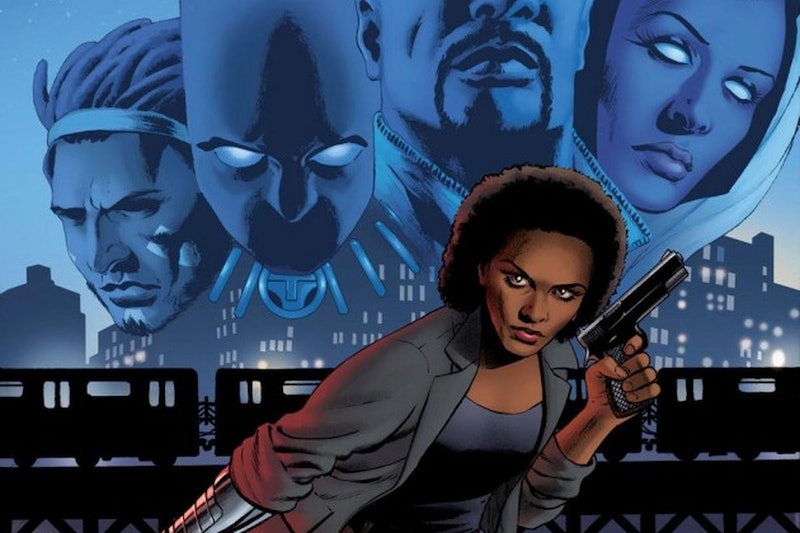 This week began with sad news for progressive comic book fans on Sunday, as Marvel cancelled Black Panther & The Crew, Ta-Nehisi Coates' anti-police brutality comic. The story focused on five black superheroes — Black Panther, Luke Cage, Manifold, Misty Knight, and Storm — who team up to investigate the death of Ezra Keith, a Harlem activist who spent his last hours in police custody. The team will get to see their investigation through to its end, but Black Panther & The Crew will end on that note, with just six issues under its belt.

The announcement of Black Panther & The Crew's cancellation comes on the heels of massive cuts to Marvel's lineup. Although the Big Two comics publisher's output was bloated — CBR reports "an average of about six new #1s [sic] a month ... an astounding number of titles." — with new series, Marvel Senior Vice President of Sales and Marketing David Gabriel told industry professionals in March that diverse titles were weighing Marvel down:

Gabriel has since attempted to walk back his comments, but that hasn't stopped some regressive folks from latching onto the narrative that diversity almost killed Marvel Comics, even though that's demonstrably false. As CBR points out, comic book sales were down across the board last year, and "[b]laming 'diversity' only goes so far when it is series about white men and teams of white men that have been dropping the furthest."

It's also important to note what's been going on in Marvel's latest major story arc, Secret Empire. In a nutshell, Steve Rogers' entire history was changed and so — surprise! — Captain America has been a secret Hydra agent this whole time. Not only that, Secret Empire No. 0 reveals that the version of history in which Captain America helped the Nazis win World War II was the original, and that all of the reality-warping was actually done after the fact by the Allies.

This means that Captain America, that red-blooded hero created by two Jewish artists mere months before the U.S. entered World War II, has always truly been a Nazi. And Magneto, the Jewish Holocaust survivor? He's a Nazi, too. And even as Supreme Leader of Hydra, Captain America has been deemed worthy to wield Thor's hammer, Mjolnir, which not only hearkens back to the Nazis' obsession with Norse mythology, but also effectively turns Marvel's version of the legendary weapon into a bona fide hate symbol.

With all this going on, cancelling the only mainstream, black-superhero-team comic, especially when that comic engaged with real-world manifestations of anti-blackness, is the pinnacle of bad optics for Marvel. Make no mistake, both Captain America and Black Panther are political characters. By shifting Cap's alliance from U.S. to Nazi, and by rounding up Coates' anti-police brutality comic in its purge, Marvel has made its politics clear.

More like this
16 Novels That Paint A Realistic Portrait Of Abortion
By K.W. Colyard
Candice Carty-Williams’ 'People Person' Tackles Daddy Issues With Warmth
By Sam Rogers
'Bridgerton' Season 3 Includes A Major Cast Shake-Up
By Grace Wehniainen
The Trailer For The 'Game Of Thrones' Prequel 'House Of The Dragon' Is Dark AF
By Grace Wehniainen
Get Even More From Bustle — Sign Up For The Newsletter