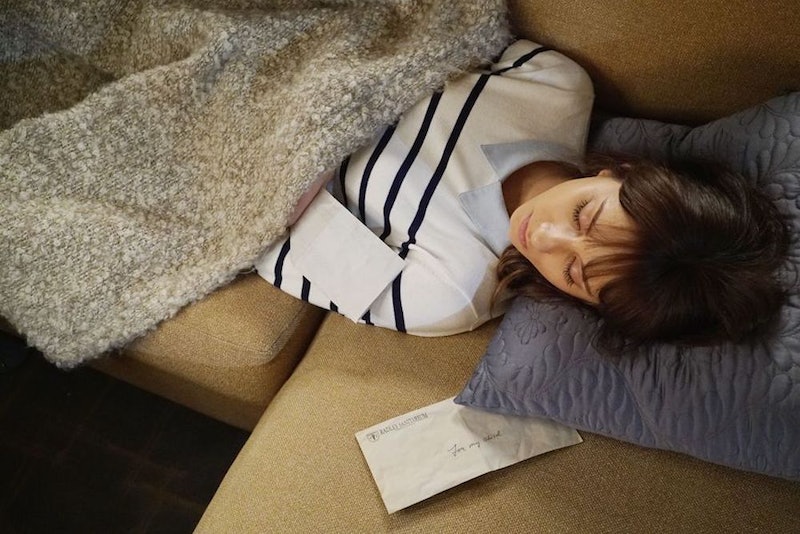 In one of the most heartbreaking moments in Pretty Little Liars history, Veronica confirmed that Mary Drake is Spencer's biological mother on PLL's Season 7B premiere "Playtime." Spencer confronted her mother right as she came home from abroad, and Veronica told Spencer the entire story. It turns out that Mary Drake wasn't lying when she told Spencer she was her mother. As Veronica tells Spencer, Mary Drake got pregnant after a run-in with Spencer's father, Peter, in a restaurant one night. He thought she was Jessica DiLaurentis, and Mary Drake got pregnant with Spencer. So, what does this mean for Spencer? And, more importantly, what does this mean for Spencer and A.D.?

A few key details stand out in Veronica's retelling of Spencer's birth. For example, she said that Jessica came knocking at her door, telling her about how her sister, who was kept in a mental institution, was pregnant — again. We know that Mary Drake previously had a daughter, Charlotte, so this confirms that Charlotte and Spencer were actually related. Furthermore, Veronica mentioned that she immediately knew that she wanted to raise Spencer as her own, and she waited just outside the hospital when she was born. Spencer doesn't look to be in a forgiving mood, but the fact that Veronica has been there for her for her entire life will definitely make it easier.

The news that Mary Drake is her biological mother will definitely throw Spencer for a loop — it already has. With Mary Drake still on the run, Spencer has nowhere to turn for answers. That is, not until A.D. sends her a message daring her to play the Liar's Lament board game to learn more about her birth mother. And she does. After A.D. sends her on a dare to visit Toby in the hospital, the game spits out a reward: a letter supposedly written by Mary Drake to her unborn child.

Of course, when A.D. gives, she also takes. Now that Spencer has started playing the game, A.D. isn't going to let her, or the others, stop anytime soon.

More like this
Jesse Tyler Ferguson Had A Funny Run-In With A Fellow ‘Modern Family’ Alum
By Grace Wehniainen
“The Door Is Always Open” For Another 'Breaking Bad' Spin-Off, Says AMC Boss
By El Hunt
Martin Hancock’s Wife Played A Key Part In His Return To 'Coronation Street'
By Catharina Cheung
Paapa Essiedu Likes To Keep His Relationship Pretty Private
By Maxine Harrison
Get Even More From Bustle — Sign Up For The Newsletter