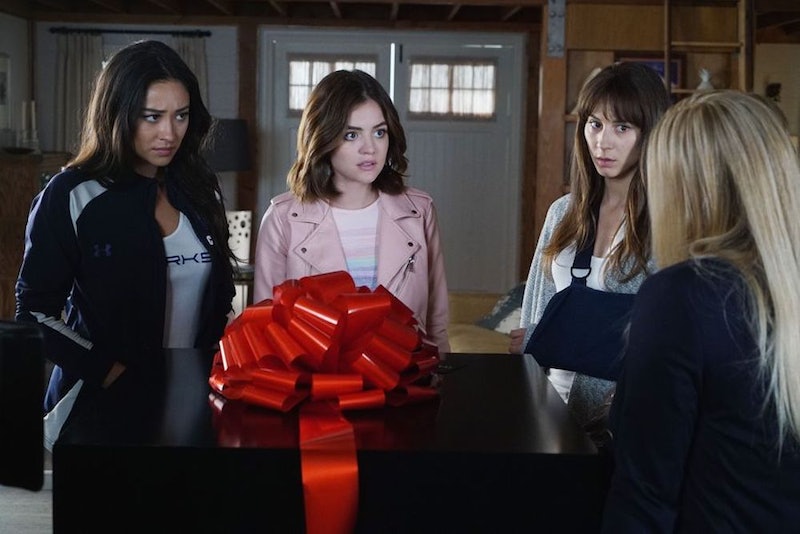 A.D. is back, and she's brought a brand new game to play in the last stretch of Pretty Little Liars. In the PLL Season 7B premiere, "Playtime," A.D. sent the girls a very clear message: The game is still on. And, in classic A.D. fashion, the message came in the form of a literal game, a homemade board game called "Liar's Lament," and everyone except the liars wants to play.

The Liar's Lament game was left in a giant gift box in the final Pretty Little Liars season premiere for Spencer, Aria, Hanna Aly, and Spencer, with a simple note that reads, "It's playtime! A.D." It turns out, Noel wasn't A.D. after all (he's currently without a head, so I can't really imagine him putting together this exceptional arts and crafts project), and the real A.D. isn't about to give the liars a break just because Spencer got shot. The game features a freakishly intricate board of Rosewood, with Home marked at the town square, and the white church where Charlotte died clearly visible. Not only that, every girl has a custom token, meaning A.D. wants all of them to play. On the side of Liar's Lament is another message: "Endgame...Bitches."

The game immediately sparked the imaginations of viewers everywhere, and now everyone wants to play Liar's Lament, even though most of the Liars didn't.

By the end of the episode, Spencer started playing the game, which means that now all of them are stuck playing A.D.'s freaky new board game. If they stop, A.D. will release a video of them burying Elliott Rollins in the woods, and they'll all be going to jail for murder (again). A.D.'s board game might look innocent, but it's sure to have very serious consequences as the series wraps up. The Liar's Lament is just getting started.