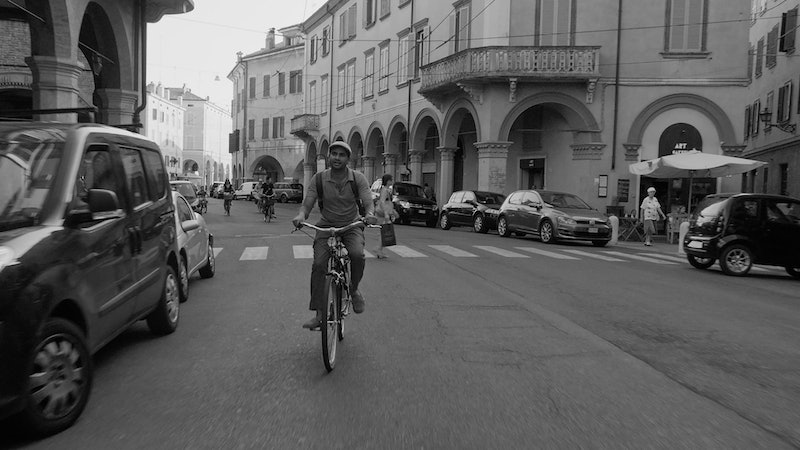 Aziz Ansari's Netflix comedy Master of None may take aesthetic inspiration from '70s film, but the show itself is ahead of the curve, particularly when it comes to representation. The first season devoted entire episodes to what it is to be a first generation American, how Indian people are portrayed on screen, and how men don't notice everyday sexism. Season 2 of Master of None advances representation in those ways and more. There are some spoilers for Master of None Season 2 ahead.

With a cast that's more than 50 percent people of color, these stories come naturally. This is what I like to see, shows like Master of None, Brooklyn Nine-Nine, Harlots, American Gods, 13 Reasons Why, Orange is the New Black, Degrassi: First Class, and How To Get Away With Murder that make representation look and feel effortless. Not that there isn't a time and place for "very special episodes," but a true sign of progress is when a show can tell a variety of different stories that touch on important issues without needing to call attention to itself.

Season 2 of Master of None didn't suddenly introduce a queer character or people of color after complaints, either — the show was inclusive from the start and upped its game the second time around. One of the things I really like about this series is that its showing me things I didn't realize I was missing. That's not too hard to do with me, a girl who looks like every Star Wars heroine ever, but I still think that Master of None goes the extra mile.

First of all, there's the episode "New York, I Love You" that focuses entirely on strangers, largely people of color and/or immigrants, and including a few scenes with dialogue performed entirely in American Sign Language — and with no background sound. It forces you to pay attention to the actors and puts you in the character's POV. Sure, Switched At Birth opened some doors with regards to characters who are deaf or hearing impaired, but the need for representation doesn't end once it's been done well one time. Plus, the scenes in Master of None was also about a woman wanting her boyfriend to go down on her more — and it's awesome (and so rare) to see women ask for what they want in bed at all.

There are also scenes that just aren't in English at all. One of the subtler ways that Master of None is inclusive and diverse is the way that it doesn't cater to or talk down to an American, English-speaking audience. Allora!

The "Thanksgiving" episode, co-written by Lena Waithe, details Dev and Denise's friendship over the years with a series of Thanksgiving dinners. The episode explores the ups and downs of Denise coming out to her family as gay and bringing girls over for dinner. While there have been multitudes of coming out stories on television and a fair amount of LGBT women of color, the two rarely converge. Aziz Ansari is an Indian American from South Carolina, but that doesn't mean his show can't feature an entire episode about a black woman telling her mom that she's a lesbian.

Finally, kids who grow up in religious households all have similar experiences. I don't need to tell you why it's important to show a normal Muslim family on television in 2017. Of course, true to form for Master of None, the religious discussions in this episode were mostly focused around food.

This show is a trailblazer in some ways, and a trail widener in others. The episode "First Date" showed Aziz dating a variety of women of different ethnicities. "Door #3" has Brian's dad caught in a love triangle. Every single episode is different, and both the show and the television landscape are better for it.

More like this
'Gentleman Jack’s Cast & Crew Are Keen On Season 3, Too
By Frances Stewart
Everything To Know About ‘The Handmaid’s Tale’ Season 5
By Amanda Whiting
'Heartstopper’s Kit Connor Revealed Why He Doesn't Label His Sexuality
By Nola Ojomu
'Heartstopper’s Joe Locke Has A Sweet Message For Queer Fans
By Sam Ramsden
Get Even More From Bustle — Sign Up For The Newsletter