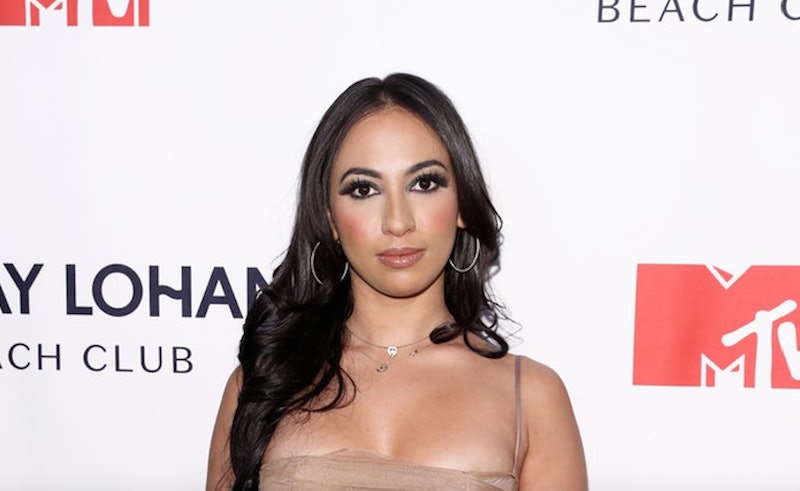 Lindsay Lohan is on a mission to shape her personal brand in Lindsay Lohan's Beach Club, and in order to do that, she needs to surround herself with the best possible people. That's why she hired a team of VIP hosts from the most exclusive bars and clubs in the U.S. to work at her Mykonos beach club and show her A-list guests a good time. Unfortunately, not all VIP hosts are created equal, and some of her employees are giving Lindsay a bad name. In Episode 6, Lindsay finally fires May from Lohan Beach House, but does that mean May is leaving Mykonos for good? The preview for next week's ep leaves things a little unclear...

Before Episode 6, May Yassine wasn't exactly the most memorable personality on Lindsay Lohan's Beach Club. She didn't have the boisterous personality of Brent Marks, and she didn't pull any dramatic or dangerous stunts like Jonitta Wallace. Unfortunately, the former waitress and bartender from New York caught her boss's eye for all the wrong reasons.

For anyone who's been following along since the start of the season, it probably shouldn't come as a surprise that May wound up getting the boot. Panos was never impressed with her work ethic (or lack thereof). While the other hosts would be running around taking care of clients, May often seemed like a lost little lamb, unsure of where to go or what to do.

By Episode 6, which was forebodingly titled "Crossing Lindsay," May walked right into Panos's trap. Lindsay's co-owner and creative director said that he was going to be keeping an eye on May, Jules, and Gabi, giving them high-profile VIPs to wait on as a secret test of their competence.

Unfortunately, May and Jules decided to run a rogue mission of their own, passing out business cards on the beach. Their intentions were pure, but the execution was so shockingly poor that someone had to pay the price, and that someone was the group's ringleader, May.

While it looked like May would be boarding the next boat out of Mykonos ASAP, the preview for Episode 7 shows Lindsay bringing May back around. While that action seems confusing, May's Twitter account is awfully clear about the fact that she was definitely fired.

Even though Lindsay might decide to go easy on May in Episode 7, it sounds like Panos is still just as irritated with May as ever. He took to Twitter to personally call out May and Jules once more for not showing up to take care of their assigned guests.

"Not cool when you are signed up to do something and you don't show up on time!" he tweeted during Monday night's episode.

May retorted back that she was just trying to avoid being called lazy, which kind of gives the impression that she still has no idea where it all went wrong.

While it looks like we haven't seen the last of May quiiiiite yet, I'd be surprised if Lindsay put her back on the staff for the rest of the season. In fact, given all the drama that's already been previewed between Lindsay and Kaila, I'd guess that May won't be the last VIP host leaving Mykonos before the summer is over.