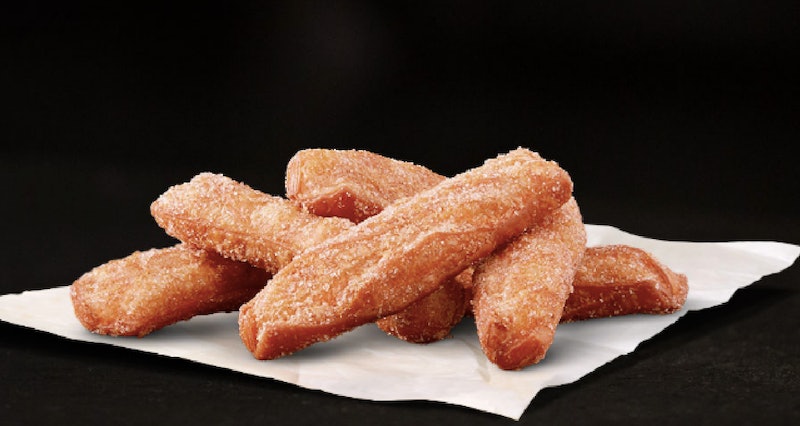 They're finally here. The elusive McDonald's Donut Sticks — the fried, sugary goodness that will certainly start your day off with a jittery bang — have arrived. The internet was set a-twitter when Business Insider leaked that some kind of stick-like, donut joy would be coming soon from old Maccie D's — but it's now confirmed. Why would you want your donut in stick form? So many reasons. Convenience. Mess. Being able to throw it and have your dog chase it and bring it back. Why wouldn't want your donuts in stick form? And these look, frankly, delish.

"Our new donut sticks add a touch of sweetness to your morning," the McDonald's website reads. "Sweet golden-brown dough, sprinkled with cinnamon sugar and made fresh every morning makes these a perfect companion for a cup of rich, flavorful McCafe coffee." The sticks will be available at participating venues for a limited time — though how limited remains to be seen.

After McDonald's CEO Steve Easterbrook told investors he wanted to "do better at breakfast", it's been clear that the company has been trying to up their A.M. game — and these puppies are priced to sell. Half a dozen breakfast sticks will have a price of $1.29, while a dozen will go for $2.39. You can also go for the full morning experience with a half dozen breakfast and a small coffee for $1.99 — not a bad price for a sugar and caffeine time warp that gives me a mild headache just thinking about it.

But it seems clear that McDonald's is trying to keep up with breakfast competitors — and comparisons have been made to Dunkin's Donut Fries, which similarly put all of the greasy goodness of a donut into a straighter, less-round package. While some might scream copycat, I scream, "MORE DONUTS ARE NEVER A BAD THING." In fact, this whole situation is just crying out for a taste test, am I right? As others have pointed out, all of these fried dough sticks seem to basically be less good, knock-off churros — but I'm all for the many different ways we can fry dough and make it delicious. Let the donut stick wars rage, we'll all just reap the benefits.

Although McDonald's Donut Sticks will only be available during breakfast hours — because McDonald's breakfast hours continue to be a villain to us all — it does look like they have enough sugar to last you all day. Of course, if you're lucky enough to be in the UK, you can pick up the Twix McFlurry to keep you going during the afternoon — and McDonald's customers in Sweden are special enough to have a vegan Happy Meal option. If you're in the US of A, you'll just have to eat enough Donut Sticks every morning to carry you through the rest of the day. Challenge accepted.

There are a lot of different ways the big fast food names try to lure us into their shops and away form competitors — and donuts are always a popular choice. Whether or not this could turn into a war between every fast food outlet in the world desperate to perfect their own version of a donut remains to be seen — but here's hoping.