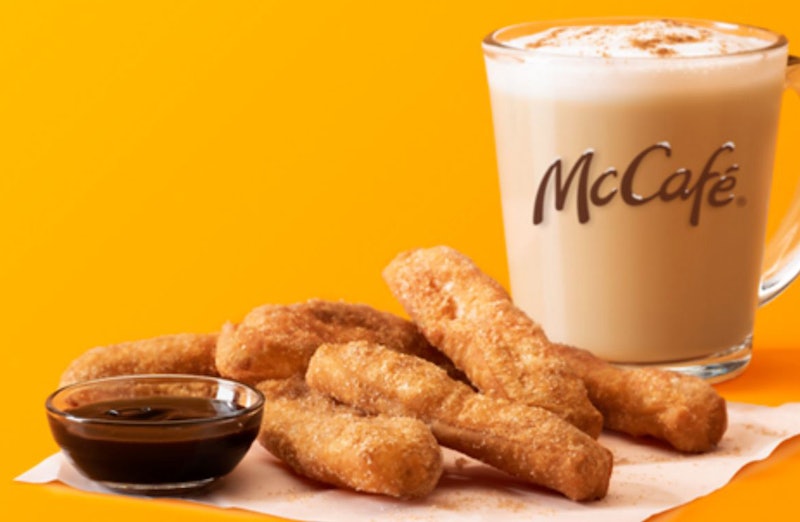 As we all try to will chillier weather into existence, restaurants and retailers are doing the same, announcing seasonal product offerings the second the calendar says “Not Summer.” Joining the wintry ware ranks, McDonald’s has just announced its seasonal McCafé menu which includes the McDonald’s Donut Sticks and a Cinnamon Cookie Latte. Whether you’re ready for cooler weather or all this talk of the cold has you saying “bah humbug,” doughnut stick and drinkable cookies are arriving on Nov. 6 to put even the grinchiest of us in a festive mood.

“We were inspired by our customers’ excitement for the holidays when crafting our Cinnamon Cookie Latte, a new and limited-time flavor that evokes the warm, cheerful feelings of the season,” McDonald’s Chef Mike Lingo said in a press release. “Our latest beverage innovation combines the captivating aroma and flavor of cinnamon that evokes the holiday feeling in us all. We’re excited for our customers to get a taste.”

McCafé's new Cinnamon Cookie Latte is the latte your childhood self dreamed about. It is the coffee drink you crave, particularly if you crave coffee drinks that taste less like coffee and more like cookies. Made with cinnamon, milk and freshly brewed espresso, the Cinnamon Cookie Latte is, well, exactly what it sounds like: a cinnamon cookie in a glass. The seasonal latte is topped with a sprinkle of cinnamon and is available in hot or iced form. How much would such a drink cost? $7? A dozen snickerdoodles? Nope, just $2. Wintry happiness costs two George Washingtons.

In addition to the Cinnamon Cookie Latte, McDonald’s is bringing back their fan-favorite Donut Sticks. McCafé Donut Sticks are basically doughnuts shaped like churros, perfect for dipping into the warm chocolate sauce they come with. Their Donut Sticks have a “light and airy texture” and are sprinkled with cinnamon sugar. The outside is crunchy. The inside is soft and doughy. They’re the perfect way to start your morning, especially if you need a little “it’s 7:30 a.m. and I need something to munch on while I sit in traffic” treat.

“We’re giving customers more of the goodness they crave and pairing the return of Donut Sticks with a new decadent Chocolate Sauce,” Chef Lingo said. “We always let our customers be the guide, and a dipping sauce was highly requested when they asked for an accompaniment to go with the popular cinnamon treat. Our rich and delicious Chocolate Sauce is the perfect pairing for our Donut Sticks to sweeten up the holiday season.”

When put on the menu back in February, the Donut Sticks were available under $3: $1.29 for six or a dozen or $2.39. Both the Donut Sticks and Cinnamon Cookie Latte will be available for a limited time starting Nov. 6 at McDonald’s locations nationwide.

These aren’t the only sweet treats McDonald’s has brought to its menu this year. Back in April, tale of the Stroopwafel McFlurry coming to the states made rounds on the internet. However, when Bustle reached out via email, McDonald’s responded, “Geen commentaar.” That’s Dutch for “No comment.” Fortunately, just a month later, McDonald’s announced that its international menu would be coming to the U.S. for a limited time in June. This included the elusive Stroopwafel McFlurry which blended caramel, vanilla soft serve, and eponymous stroopwafel waffle into one delicious treat.

More like this
Dunkin’s Pumpkin Spice Latte Is Officially Back This Week
By Mia Mercado
The 8 Best Chew Bones For Puppies, According To A Vet
By Andrea Hannah
Lotus Biscoff Does A Biscuit-Chocolate Hybrid Now
By El Hunt
I Tried The $20 TikTok Viral Oishii Strawberries — Here's What I Thought
By Sophie Hanson
Get Even More From Bustle — Sign Up For The Newsletter