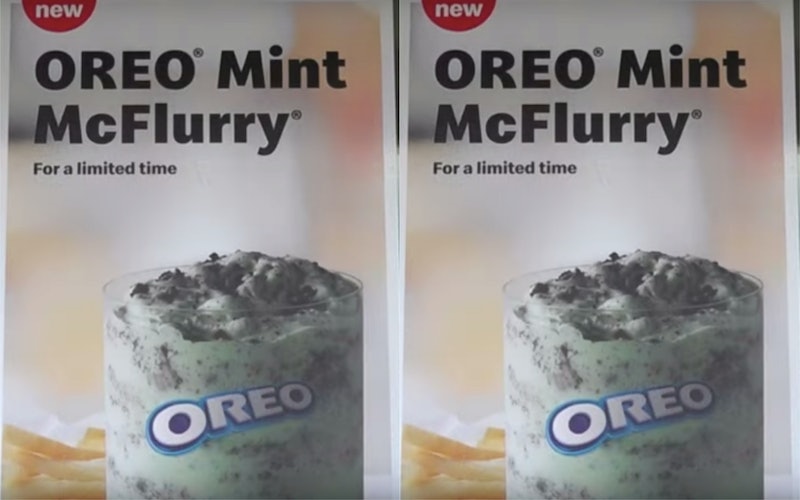 We may be but mere minutes into the fall season, but it seems the holidays are already here — or at least, they are at McDonald's. Two of the most beloved ice cream creations at the chain, the minty seasonal Shamrock Shake and the Oreo McFlurry, apparently copulated over the summer, and the result is McDonald's new Mint Oreo McFlurry. Granted, this Mint Oreo McFlurry has not made any kind of official or nationwide rollout at the time of this post, but it has been spotted out in the wild — so hopefully it will generate enough buzz to get a wide release so the rest of us try it, too. (Bustle has reached out to McDonald's about the availability of this treat, and will update upon response.)

The Mint Oreo McFlurry was put on the internet's radar by popular YouTuber Peep THIS Out!, who spotted the Mint Oreo McFlurry advertised at a McDonald's in Southern California. In a video posted on Sept. 21, Ian K., the reviewer who runs the account, gave a detailed review and an up-close look at the new offering. He also asked a McDonald's employee how the shake was made, confirming that it has an Oreo McFlurry base (which is a vanilla soft serve with Oreo pieces mixed in) with added Shamrock Shake Syrup, giving it a minty fresh flavor. Per Ian K., it retailed for $2.69 (but prices generally vary by location, assuming the shake is available at other select McDonald's).

You can check out Ian K.'s review of the limited time offering below.

This isn't the first shakeup that Ian K. has spotted in McFlurry land this year. In August, Peep THIS Out! also reviewed a Snickerdoodle McFlurry, which included bits of sugar cookie and cinnamon mixed with the chain's vanilla soft serve. And while we haven't seen any kind of larger rollout of that McFlurry emerge, ice cream fans did get to enjoy a different McFlurry offering in a similar vein — in June, a Stroopwafel McFlurry hit the menu nationwide for a limited time. Per McDonald's, the offering — which was one of several items included in McDonald's limited time "Worldwide Favorites Menu" — includes "creamy vanilla soft serve, mixed with a rich caramel swirl, featuring authentic chopped Dutch Daelmans Stroopwafel caramel waffle cookie pieces."

Even though you might not be seeing the Mint Oreo McFlurry at your local McDonald's, you still have the mainstays of the Oreo McFlurry and the M&M's McFlurry to choose from. And if you're really and truly thirsting for the new offering, there are several bajillion tutorials on the internet for how to make your own McDonald's Shamrock Shake — if you add "mix in crushed Oreos" as an extra step, you've got yourself an Oreo Mint McFlurry without even having to walk out the front door. In the meantime, keep your eyes peeled, particularly if you're anywhere in the Southern California area. These menu tests may sometimes be too hyper local to get nationwide rollouts, but you never know what test menu items you might find in your area.