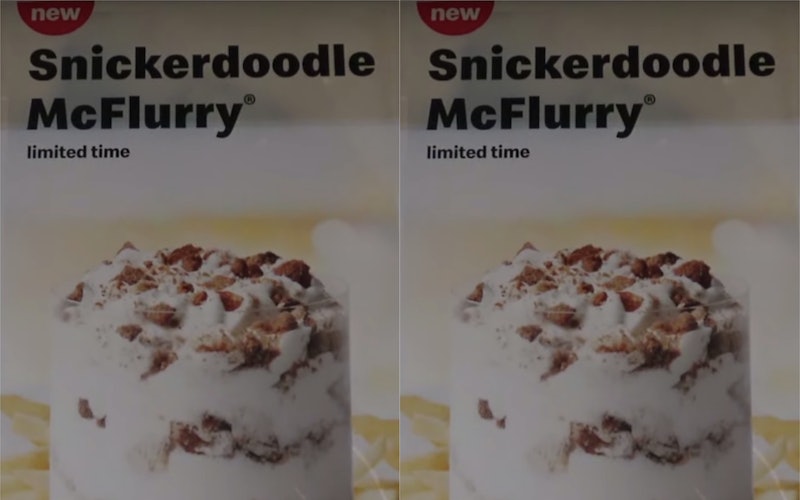 Cinnamon, sugar, ice cream, and cookies — if you're not salivating right now, you're definitely not paying attention. If you love the traditional sweet and cinnamon buzz of a Snickerdoodle cookie, then prepare to get excited — because there has been an actual sighting of a McDonald's Snickerdoodle McFlurry — and it is just as good as it sounds.

The ever eagle-eyed Ian K. of the Peep THIS Out! YouTube channel found this decadent treat at his local McDonald's and gave it a try. Don't worry, it delivers. Describing it as "pretty creamy and lots of crumble goodness on display for you," it looks like the perfect base-to-mix-in ratio and he said it tasted as good as it looks.

Where did this magical concoction come from? According to the video, one of the employees explained that the McFlurry is basically a mixture of their amazing sugar cookies and cinnamon whipped up with their classic vanilla ice cream McFlurry base — that's something that's pretty easy to get behind. If you want a flavor that has a major appeal to pretty much everyone, you can see why the cinnamon goodness of a Snickerdoodle would fit that bill.

If you're looking to get your hands on one, you'll have to keep your eyes peeled. This one was spotted in the wild at a McDonald’s in Southern California for $2.69 — and I can't wait to see where else it pops up.

The cinnamon-sugar mix of a Snickerdoodle is a classic flavor combination, but it's certainly not the only option if you're looking for an exciting McFlurry. Yes, it's true that McDonald's international menu items tend to be totally jealousy-inducing — lest we forget the power of the Twix McFlurry over in the UK, which looks almost too beautiful and powerful to ingest. But we do some pretty amazing things right on America soil, home of the Party McFlurry in all of its giant goodness. Yes, some of our McFlurries are imports — nobody is complaining about the deliciousness of the Stroopwafel McFlurry being brought in from the Netherlands — but we have the Oreo McFlurry and that is truly a thing of beauty.

Of course, there is plenty to love about McDonald's outside of the McFlurry, as well — and they're always pushing boundaries. This summer, they tested Blueberry Breakfast McGriddles which were enough to stop you in your breakfast-loving tracks, so it's always good to keep checking out what is new on offer or being tested in your area locally. The competition for fast food is fierce, but the OG McDonald's always manages to stay ahead of the game. And, no matter what, you always have the classic apple pie to fall back on.

McDonald's definitely isn't afraid to innovate, but some of those classic flavor combinations just prove themselves over and over again — so you can see why the Snickerdoodle McFlurry would be such a hit. No word yet on just how wide-spread it will be, but I can guarantee the sublime mix of sugar cookie, cinnamon, and ice cream will feel like the warm embrace of a loved one after a long journey. Or something along those lines.