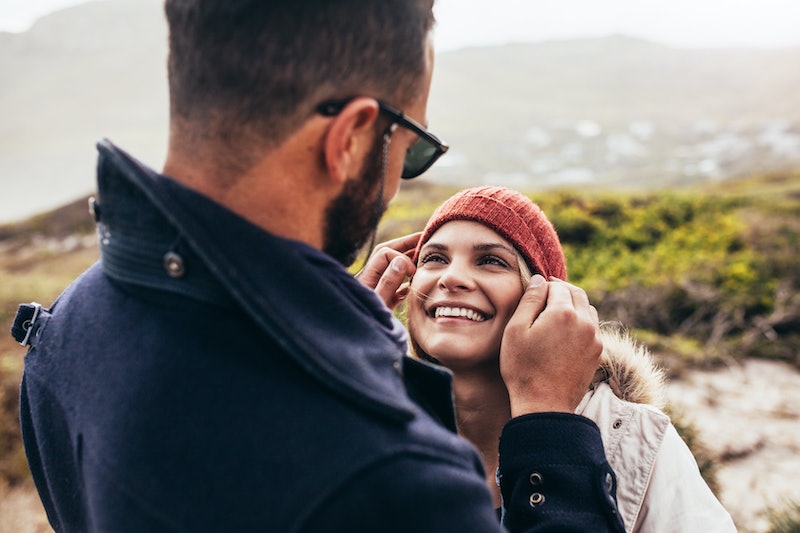 First, it‘s important to know why this one particular planet going retrograde matters in the first place. “Mercury speaks to our perceptions, our ability to receive and communicate information,” popular YouTube astrologer, Nadiya Shah tells Bustle. “With Mercury Retrograde, the planet appears to be traveling backwards in the sky. Because of that, Shah says, our perceptions and communication might not be as clear as we expect.

Despite all the troubles Mercury going retrograde can bring, that doesn't mean you shouldn’t take a chance on love.

What To Keep In Mind If You Start Seeing Someone New

One major thing to keep in mind if you meet someone new is getting things off the ground can be a little challenging. “It can seem like Mercury is always playing tricks during these retrograde times,” astrologer Judi Vitale tells Bustle. “So it's important to be patient and verify your facts before moving forward or slipping out of a relationship before giving it a chance to unfold organically.”

It’s also very likely that misunderstandings can cause issues between you and someone new. For instance, you might think you agree on not exchanging gifts, but for some reason, someone doesn't get the memo. That might cause some upset where there really shouldn’t be. “Misunderstandings are abound during the retrograde period," Vitale says. "A sense of humor is something we all need at times like these. Keep smiling, and be open to the possibility that misunderstandings don’t necessarily equate to abandonment or neglect.”

In general, Mercury going retrograde can be a challenging time due to the possibility of miscommunication. But it's not all bad. Sometimes a Mercury Retrograde can actually work to our advantage in dating, especially if it occurs during this time of the year. "Mercury Retrograde during a holiday season gives lots of opportunities for past loves to surprise us, by popping up where we would least expect them," Shah says. "It's a great time for reconnections of all kinds, and makes us more nostalgic in general. It can also make us second guess our choices."

Since miscommunication is a lot more likely during this time, Shah says breakups that do happen during a Mercury Retrograde don't usually last. This retrograde season is also infamous for flirting with types of people we might not usually consider. "This can be a gift from the Universe to help us better understand what we had before, and if we truly want it again," Shah says. "Regardless of what manifests in the long-term, we will likely end the year with a few wonderful stories to tell.”

These Zodiac Signs Will Be Affected The Most

Because we’re dealing with astrology here, there are some signs who’ll feel the affects of Mercury on their love lives more than others.

“This holiday season, it’s the Geminis, Leos, and Sagittarians that should be on the lookout for past loves and possible breakups that don’t stay that way,” Shah says. "Virgos are most likely to reconnect with someone from their long lost past, while Pisceans may surprise themselves by attracting a father or mother figure-type into their lives at this time.”

Overall, these signs may feel the affects in their love lives the most. But everyone could use some dating advice for this time of the year. After all, it’s a Mercury Retrograde during the holiday season, which is like a double dosage of stress. “Many things can go wrong during this time, it’s always appropriate to evaluate what a person can change (like forgetting your birthday), and what they can’t (a late plane flight or a flat tire)," Vitale says.

So be a little patient with your love life at this time. “I’m a big believer in staying open and having lots of fun,” Shah says. “If this holiday’s Mercury Retrograde season says anything, it’s that we are more likely to live it up and look back later with no regrets. It is in our most expansive, adventurous holiday pursuits that love may find its way to us. An intense whirlwind becomes possible now for many of us, but that can also be part of our path towards the love we truly desire.”

Mercury going retrograde can be annoying for a number of reasons. But don’t let that stop you from having a great time with someone new you might meet. You might not have the easiest start, but luckily Mercury goes direct right before Christmas. If you take it day by day, you’ll be fine.