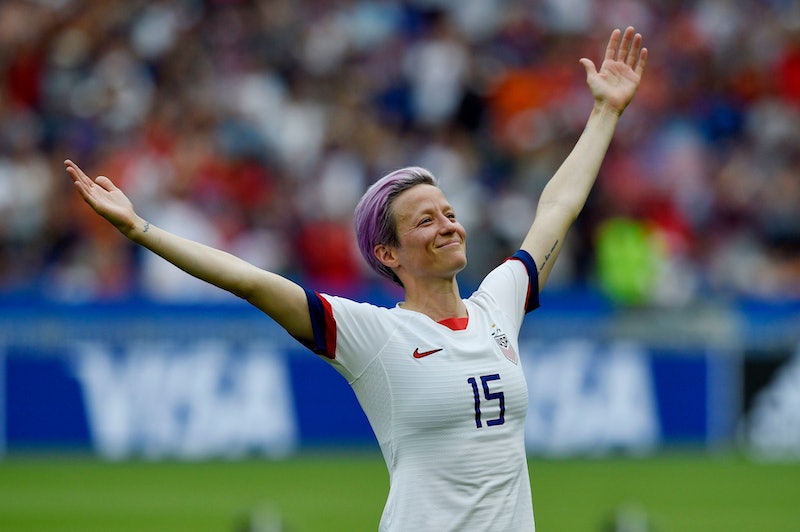 There are a handful of public figures who will come to define 2019 in the years to come, but perhaps no one more so than U.S. soccer player Megan Rapinoe. She has made headlines not only for helping carry her team to World Cup victory, but also for speaking out on everything from equal pay in women's soccer to her disdain for the current administration (her bold statement, "I'm not going to the f*cking White House," will surely go down in history.) You'll be hearing even more from the athlete in the years to come, because Megan Rapinoe just landed a book deal, according to The New York Times.

The first of two untitled projects is expected to be released in fall 2020 — at least we have one thing to look forward to during election season, am I right? — and it will include stories from Rapinoe's own life, as well as discussions on the social justice issues she has become a spokeswoman for, particularly LGBTQ+ rights and equal pay for women. Rapinoe has also signed on to write a middle-grade book with Razorbill, a division of Penguin Young Readers, which will address "the power young people have within their own communities and the world at large," according to a statement from the publisher. There is no word yet on when that book will be released.

In a statement to The New York Times, Penguin Press president and editor-in-chief Ann Godoff shared her excitement about Rapinoe's book project: "A lot of women, great women soccer players, have written memoirs. Megan has a different platform. While watching the World Cup, I thought, ‘Here’s a woman who is comfortable in her own skin.' She’s just operating from this very honest and straightforward and ‘This is who I am’ place. I think that’s what many people aspire to.”

It is undeniable that Rapinoe has become an aspirational figure for many people, in sports and beyond. In her speech at the U.S. team's ticker tape parade in New York City, Rapinoe reiterated her stance that she and her teammates are "so much more" than just athletes: "We have to be better. We have to love more, hate less. We've got to listen more and talk less. We've got to know that this is everybody's responsibility, every single person here... It's our responsibility to make this world a better place."

For Rapinoe, one of the first of many steps in that plan is a book. Keep an eye out for her first release, which will hit shelves in fall 2020.