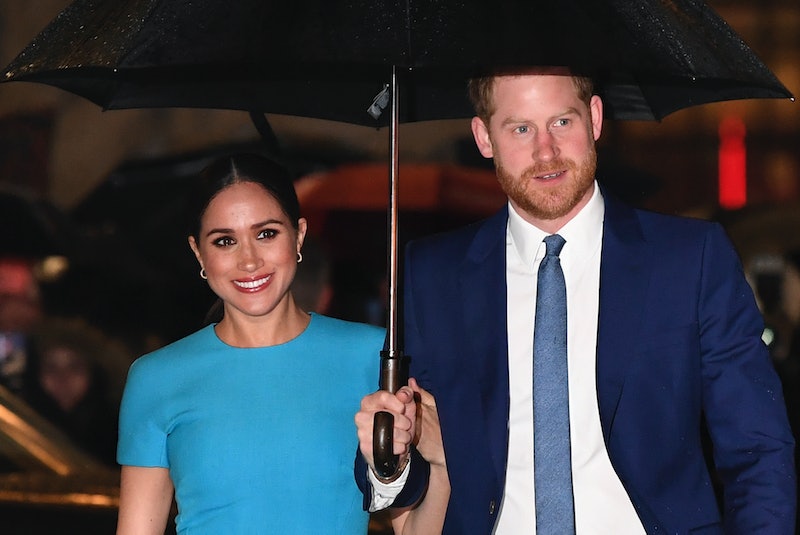 Could Prince Harry, Duke of Sussex and Meghan, Duchess of Sussex soon spill some royal tea? Meghan and Harry reportedly granted an interview for an upcoming tell-all biography titled Finding Freedom: Harry and Meghan and the Making Of A Modern Royal Family. According to a Deadline report published on May 3, Finding Freedom authors Omid Scobie, royal editor for Harper's Bazaar, and Carolyn Durand, royal contributor for Elle and O, The Oprah Magazine, reportedly interviewed Meghan and Harry prior to their move from the UK to Canada (and later, Los Angeles). Bustle has reached out to Meghan and Harry's rep for comment.

Finding Freedom, available on August 11, will go “beyond the headlines” and chronicle “unknown details” about Meghan and Harry’s life together, as well as dispel the “rumors and misconceptions that plague the couple on both sides of the pond,” per the biography’s blurb on Amazon. With Scobie and Durand’s “unique access” and the “participation of those closest to the couple,” the biography promises an intimate portrait of the “confident, influential, and forward-thinking couple who are unafraid to break with tradition” and “determined to create a new path away from the spotlight.”

The reported interview will be one of the first since Meghan and Harry officially stepped down as senior members of the royal family in March. Since their relocation to Los Angeles with son Archie that same month, the two have been spotted out and about delivering groceries to families in need with charity Project Angel Food during the global health crisis, surgical masks and gloves in tow.

The tell-all would mark Meghan’s second project post-royal split. The duchess last narrated the Disney+ nature documentary Elephant, which follows a herd of resilient African elephants as they journey across the Kalahari Desert. In partnership with Elephants Without Borders, Disney donated Meghan's voiceover fees to the charity dedicated to wildlife conservation in Botswana.

“She was absolutely intrigued by the elephants, and transfixed, especially by the female empowerment side,” co-director Vanessa Berlowitz told PEOPLE of Meghan’s involvement in April. “How important the matriarchs are to the story; it really is all about female leadership. It’s a different form of power. She was absolutely fascinated by that.”

Since Elephant’s release, Meghan has also popped up in Zoom calls to chat with members of the UK’s Hubb Community Kitchen and to surprise a Smarts Work client before a job interview. As for what could be next for the Harry and Meghan, perhaps Finding Freedom will provide some insights.