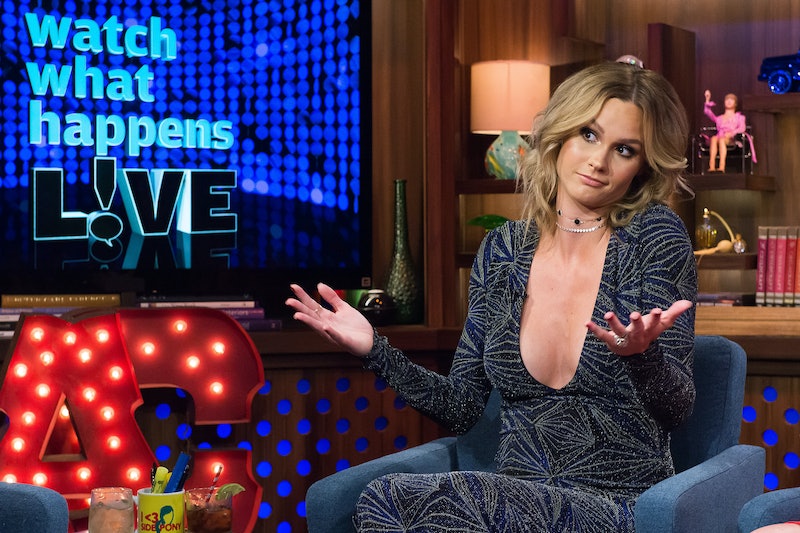 In a new interview with Us Weekly, Meghan King Edmonds has responded to Jim’s latest claims about their divorce. On Monday, Nov. 4, the outlet released a story in which The Real Housewives of Orange County alum shared her thoughts on Jim and the nanny's allegedly unprofessional dynamic, trying to repair their relationship after Jim's text indiscretions came to light in June, being caught off-guard by the divorce, Jim's family's comments, "[enduring] prolific controlling by Jim," and how little she communicated with Jim before he provided a statement to Us Weekly on Oct. 30. She told the magazine that when her estranged husband “gave the ‘nice’ interview” last week, he was speaking on her behalf without her permission. She shared, “At that time I had not exchanged one text message with him and I have still not spoken to him on the phone."

The former reality star also said that it is “not fair to [her]” that he implied the two had discussed trying to iron things out. She explained, “He is not my mouthpiece, and I believe the facade he presented is false and manipulative to the public while using and taking advantage of me. I’m sick of the abuse and I won’t engage anymore — and I don’t have to.” She also detailed that his alleged “prolific controlling" has included "hurl[ing] insults at me for a battery of made-up indiscretions" on her Instagram posts.

Meghan shared a link to the Us Weekly interview on Instagram, writing, "I’m sick of the ABUSE. Here’s MY TRUTH."

On Oct. 25, Us Weekly reported Jim had filed for divorce from Meghan after five years of marriage. The news was accompanied by rumors regarding Jim allegedly having an affair with Carly Wilson, their family’s nanny. The dissolution of Jim and Meghan's marriage occurred four months after Jim's sexting scandal broke. In June, he admitted to Us Weekly that he "engaged in an inappropriate conversation with" another woman via text, but maintained that there was not any "physical contact."

The retired professional baseball player responded to the accusations involving Wilson on Instagram on Oct. 28 in a since-deleted post. Per Entertainment Tonight, the caption read, "For someone to accuse me of sleeping with her is not only wrong, it’s disgusting and irresponsible." Wilson has also denied the rumors. In a post that went up on her blog on Oct. 29, Meghan said that while she does not know if they slept together, she does claim both parties lied about hanging out socially, a move that left her with questions. She wrote, “I’ve gone back and forth with my thoughts for a couple days but as I write this, I don’t think he did. But I still don’t understand why he’d lie. And why would she lie?”

The following day, Us Weekly released a statement from Jim where he said he and Meghan had a "rough" go of it for the last couple years, "were lacking quality time together," and "are exhausted and feel [their] life has become one of distrust, kids, work, house, sleep and repeat." He also called Meghan "a truly special woman," said he "[loves] his family," and promised to "make it right again."

More like this
RHOP’s Robyn Dixon Explained Why Juan Paid For Another Woman's Hotel Room
By Brad Witter
'RHOP' Stars Robyn & Juan Reportedly Got Remarried & Filmed The Ceremony
By Brad Witter
Everything To Know About 'The Real Housewives Ultimate Girls Trip' Season 4
By Jake Viswanath
Andy Cohen Apologized To Larsa Pippen After A 'RHOM' Season 5 Reunion Dust-Up
By Brad Witter
Get Even More From Bustle — Sign Up For The Newsletter
From hair trends to relationship advice, our daily newsletter has everything you need to sound like a person who’s on TikTok, even if you aren’t.