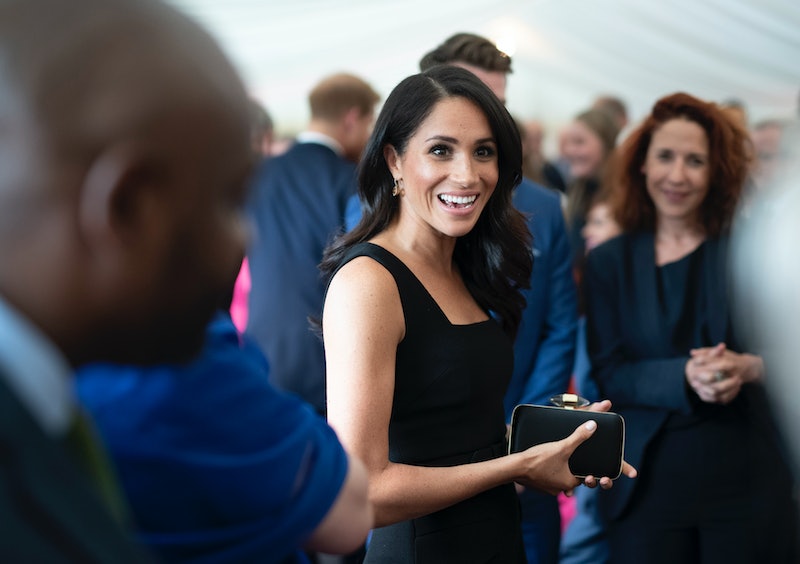 Meghan Markle and Prince Harry are currently in the middle of their first joint tour — and royal fans have been obsessing over her outfits. On Tuesday, she made quite a statement after stepping out in a dress by Emilia Wickstead, aka, the designer she had apparently fallen out with. But guess what? Meghan Markle and Emilia Wickstead are actually A-OK with each other. It looks like those reports were totally wrong.

Back in May, the Daily Mail claimed that Wickstead — a designer regularly worn by Kate Middleton — had criticised Markle's Givenchy wedding dress, saying it was "identical" to one of her own bridal creations. The paper also reported that Wickstead appeared to dislike the fit of Markle's dress. She apparently said: "If you choose a simple design, the fit should be perfect. Her wedding dress was quite loose." And that wasn't all. The publication then reported that Wickstead made a comment about Markle's bridal hairstyle. She allegedly said: "I was like, 'Hold the wisps back — it’s a royal wedding for God’s sake.'"

However, following the publication of the article, the designer posted a statement on Instagram, refuting the claims. It read:

Well, on Tuesday night, Markle appeared to address the issue in a rather subtle way. Turning up to a garden party in Dublin, she was spotted wearing a black sleeveless dress designed by none other than Wickstead. I may be reading too much into this but perhaps this was her way of showing that there are no hard feelings between the pair.

Sadly, pitting women against each other is nothing new. And that's all this alleged argument appears to be. After all, Givenchy's artistic director and designer of Markle's wedding dress, Clare Waight Keller, is a woman. In fact, she's one of the few women to head up a major fashion house; another reason why Markle may be favouring her designs.

The duchess accessorised her elegant Wickstead dress with the same £1,390 Givenchy clutch that she carried to Ascot, leather Aquazzura heels that cost more than £500, and £2,600 citrine and diamond earrings by Canadian brand Birks.

This was actually Markle's third look of the day. Her first was a deep navy Dior dress worn to mark the 100th anniversary of the RAF. The royal couple then made a quick change and hopped on a plane to Ireland with Markle stepping out in a colour perfect for her host country.

Her outfit consisted of a forest green short-sleeved knit and matching skirt by Givenchy, nude suede heels, and a £525 brown leather bag by Scottish brand Strathberry that is set to restock soon.

It's unclear how much her top costs but the skirt retails for £1,105. If you're looking to spend some serious money, the green version is unfortunately not for sale at the moment. However, you can pick up the exact same skirt in black or bright red.

On Wednesday, we will see the Duke and Duchess of Sussex take on a bunch of engagements in Ireland, so who knows how many outfit changes Markle has in store. Keep your eyes peeled, royal fashion fans.