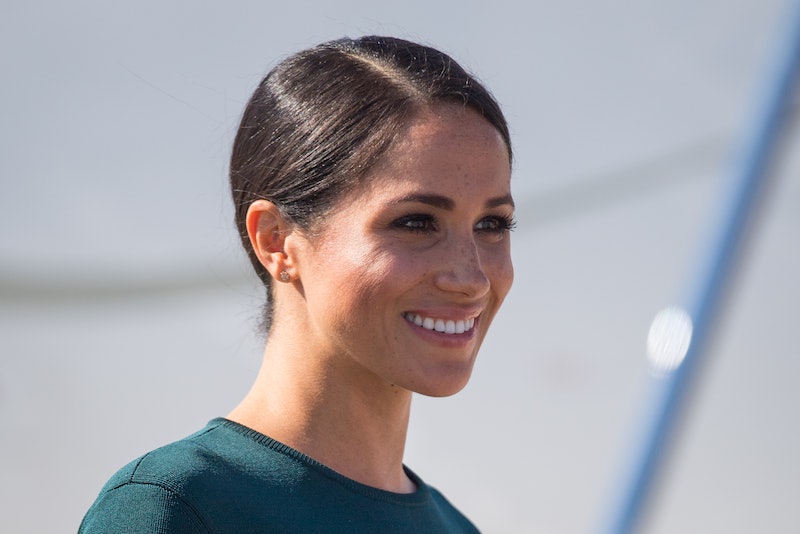 Unless you've been living under a rock, you've probably heard that there's a new royal in town, and she's mighty stylish. In fact, the new Duchess of Sussex probably made her fashion fans dreams come true on Tuesday. Meghan Markle wore three outfits and three hairstyles in a single stylish day, and that means that she just gave the world three brand new looks to emulate.

Markle and her husband Prince Harry have had quite the day with their royal agenda, and while undoutedly tiring, it's what led to Markle donning not one, not two, but three outfits complete with three separate hairstyles. What did the world do to deserve such a blessing?

Markle's first event of the day was in London where the Royal Air Force celebrated their 100 year anniversary. She was joined by her husband as well as her sister-in-law Kate Middleton and brother-in-law Prince William. For the event, Markle kept her look classic and her dress somewhat reminiscent of her wedding gown.

Markle wore a gorgeous a-line black dress that featured a bateau neck (like her wedding gown's) from the Dior. The black frock was paired with a cluth of the same color and cream heels both by Dior as well. As for her hairstyle, she kept her dark locks pulled back and added a fascinator from Stephen Jones according to Harper's Bazaar.

Does it get more British than this fascinator? No.

Markle's black Dior dress was only her first ensemble of the day. Thankfully, there was more. She and Prince Harry set out for an official royal visit to Ireland. Upon arrival, Markle wore a gorgeous hunter green three-quarter length sleeve topped paired with a fitted pencil skirt in the same color with pockets on the hips. According to The Cut, both pieces are from her wedding gown's design house Givenchy. With the ensemble, she added a pair of tan pumps and a Strathberry bag, a brand that she's worn before.

As for her hair, Markle kept it swept back away from her face like her appearance earlier. However, the new style seems to be pulled to the side a bit for a different look. Plus, the low bun is also a departure for Markle as royal fans are used to seeing her with what's become her signature messy bun.

For her final appearance of the day (seriously, isn't she exhausted?), Markle and Prince Harry attended a garden party. Perhaps because of the more relaxed nature and evening timing of the event, Markle let her hair down, like actually let her hair down. Unlike her earlier appearance in the day, Markle's long, dark hair flowed in loose waves for the party, and the look is honestly hair goals.

For her dress, Markle went back to a dark shade in an LBD designed by Emilia Wickstead. People explains that Markle's choice to wear Wickstead's design is notable because following the royal wedding, the designer actually commented that Markle's Givenchy gown resembled one of her designs. Clearly, however, there are no bad feelings between the two women. Markle looks gorgeous in Wickstead's classic, sleeveless, mid-length design.

While Emilia Wickstead is available on shopping sites like Net-a-Porter and the US site for Selfridges, the exact dress Markle is wearing doesn't appear. However, Wickstead's other designs sit firmly within the $800-$1200 range meaning that it's time for fashion fans of Markle's to start hunting for alternatives to her Dior, Givenchy, and Wickstead ensembles.

Whether look-a-like designs can be found has yet to be seen, but one thing that's true is that Markle's sartorial choices are never a let down.