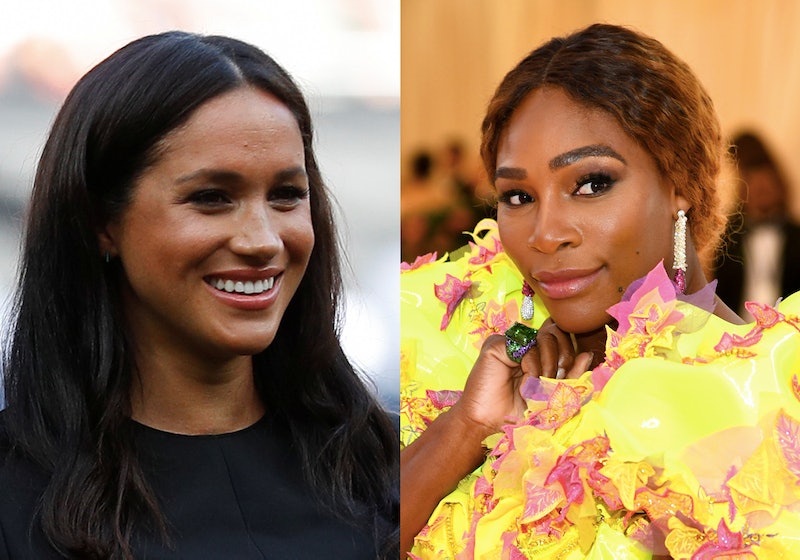 Serena Williams is not only the greatest tennis player of all time, but she's also one of the greatest friends, especially to her bestie Meghan Markle. As Us Weekly reported, Williams defended Markle against any Wimbledon controversy, which just proves that she's the kind of friend you'd want in your corner.

During a Wimbledon 2019 press conference on July 11, Williams was asked whether she knew if Markle would be coming to support her during the athlete's Wimbledon final match, particularly given the "negative" controversy surrounding the royal's previous visit, which took place on July 4 (People recently reported that Markle and Kate Middleton will be at the Women's Single's Final match).

In regards to that controversy, Williams had something very straightforward to say, "I didn’t know there was negative media out there," she said, “Any time I see her name attached to anything, I don’t read it.” The tennis champ continued to say, as seen in the video below around the 7:40 mark, that the two are such great friends and that any of the (rather unfair) controversy isn't going to get in the way of that friendship. She said,

“She couldn’t be a better friend to me. Low moments, high moments, she’s always there, and that’s all I want to be to her.”

In short, when it comes to any "negative media" that may be connected to Markle, you can trust that Williams is always going to be there to support and defend her friend.

In case you weren't aware, Markle's previous Wimbledon appearance on July 4 caused a bit of controversy for a couple of reported reasons. As ELLE noted, some tried to make a scandal out of the duchess' security team asking people not to take photos of her at the event. Additionally, her attire at the match came under fire because she was wearing jeans (yes, really). According to The Times, some All England Club members were reportedly "upset" because the royal wore jeans, which they consider a fashion faux-pas for Wimbledon.

However, the All England Club, of which the Duchess of Cambridge is a patron, refuted these claims, which just goes to show you that people were probably just making a mountain of a molehill in regards to Markle's Wimbledon visit. The Club told The Times,

"Any suggestion that the duchess’s visit was anything other than a privilege for the club is categorically not the view of the club, and she is always welcome to attend the championships."

Following these overblown controversies, and as previously mentioned, Markle will actually be returning to the tournament to see Williams' final match against Romania’s Simona Halep. And it's no surprise that the royal is going to ignore that "negative media" so that she can watch the major match, as the duchess and the athlete are known for being close friends.

In the past, they've shown that they're all about being supportive of one another, as Williams helped throw Markle a baby shower back in February, and the former actor supported the tennis star by attending the 2018 Wimbledon Woman's Single's Final that the athlete competed in. So, it's pretty safe to say that you can always count on these besties to have each others' backs, even when it comes to any ridiculous, Wimbledon-related controversies.