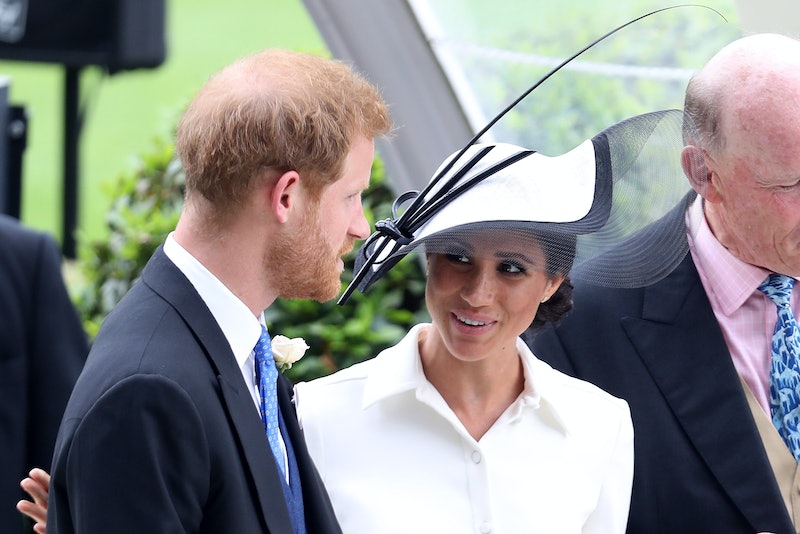 If you thought that you wanted to have your own princess fairytale, it might be time to think again. Yes, Meghan Markle actually went and became royalty — but at what cost? While a lot of people have been talking about the strict rules for royals that Markle will now have to adhere to, there's one reported rule that might be a deal-breaker for me — and anybody else who just loves them some Italian food. According to the Daily Express, Meghan Markle reportedly won't be able to eat garlic at state banquets or official events. In fact, it's reportedly off of the menu for all royals in their official capacity. I'll give you a second to clutch your pearls.

Why would anyone be forced live a life without garlic? Rumor has it it's down the OG herself, Queen Elizabeth. “We can never serve anything with garlic or too much onions," Darren McGrady, royal chef at Buckingham Palace, told The Express. "The Queen would never have garlic on the menu.” I'm sorry, Harry and William. I know you were both planning on leaving your wives for me, but I'm definitely not interested. Garlic is just too important to me.

Reportedly, it's totally fine for them to eat garlic in private — but that's just not enough. Now there's another food-related royal rule that's been flying around the rumor mill, but I have to say that this one makes a lot more sense. It's been reported by the BBC that the royal family isn't allowed to eat shellfish when traveling. Not just because they have little eyes that peer into your soul, but because it's important that the royals avoid food poisoning, especially when abroad.

Food poisoning while abroad could mean missing key events with foreign officials, not to mention it's just horribly unpleasant, as anyone whose experiences travel tummy can attest to. According to the BBC, it's reportedly also recommended that royals avoid tap water in certain areas, rare meat, and anything too spicy or exotic, for similar reasons. Essentially, anything that can lead to you locked in the bathroom is a no-go for the royals. These are just rumors, so it's unclear how enforced the rules are — and it's also been said that younger members of the royal family follow them less strictly than older ones, but who knows?

The Queen herself, however, is said to have a much more extensive list of yeses and nos when she's abroad. She reportedly avoided long pastas and messy sauces when traveling in Italy, which means her experiences bore no relation to the tomato-covered, carbohydrate orgies of my own travels. She also reportedly says no to mauve flowers, rather peculiarly, and foreign mineral waters, according to reports — but she is said to always have a kettle and some traditional English marmalade on hand when traveling. She likes to have English tea at 5 o'clock, in an unsurprising twist. And there's also a long-standing rumor that Prince Charles travels with his own toilet seat. One must have some home comforts, mustn't one. (For the record, he's said that we shouldn't "believe all that crap", which maybe wasn't the best choice of words — all things considered.)

They say that with great power comes great responsibility — but are either of those really worth it in a life without garlic? Think about the sauces, the guacs, the stir-fries of sadness that await you. The under-flavored chicken and the lifeless curries. THINK OF NO MORE GARLIC BREAD. Meghan Markle may be living many people's fairytale, but not mine. I knew the importance of a well-seasoned meal and messy pasta dishes from a young age. And really, nothing's changed. #GarlicBreadBeforePrinces.