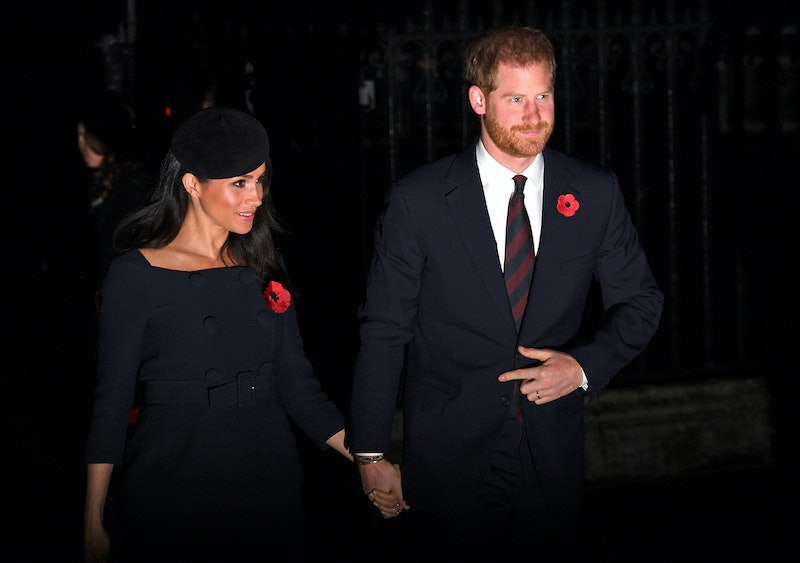 Attention all U.S.-based royal watchers, 2019 is going to be a major year for the Duke and Duchess of Sussex. That's because, as Cosmopolitan noted, Meghan Markle and Prince Harry are coming to the United States in the new year. But that's not even the most exciting part about their visit — royal expert Katie Nicholl reported that the couple is supposedly taking baby Sussex along for the journey. So, it's sure to be a royally amazing tour.

Nicholl, who is a royal correspondent for Vanity Fair, reported on Dec. 17 that Markle is set to return to her native country with her royal husband and her little one by her side in 2019. The Duchess of Sussex is planning on heading back to the United States and Canada sometime after she gives birth to her first child. There's no official date for their visit just yet (and no official confirmation from Kensington Palace itself).

But if Nicholl's report is indeed correct, you can probably expect Markle and Harry to be stateside sometime in the fall of 2019, because of the duchess' spring due date and the subsequent maternity leave she will go on following the delivery. The report also detailed that this visit was supposed to take place in the spring, but that it was postponed because of the happy pregnancy news. Now that the tour was delayed until later in 2019, baby Sussex can join in on all of the fun.

As you might recall, it was previously reported that their U.S.-based tour was postponed in October, shortly after it was announced that the former Suits star was pregnant. TMZ similarly reported that the Duke and Duchess of Sussex would visit the United States sometime in the latter half of 2019. A source claimed to the publication that Markle wants some time to adjust to motherhood before she heads out on a major engagement, which makes total sense.

Back in July, it was reported that Markle and Harry were eager to officially travel to the United States. According to Us Weekly, they were considering taking a tour locations such as California (the duchess' home state), Washington D.C., and New York. A palace insider told the publication, "Meghan is looking forward to introducing Harry to everything she loves about the U.S.”

The source also revealed that there's another reason why the royal pair want to travel to the States, other than Markle showing her husband some of her favorite spots. “Meghan and Harry want to solidify ties between the U.K. and the U.S.,” the source said, “They want to highlight and foster these relationships.”

Whenever Markle and Harry make it to the States, it will mark the couple's first official trip to her home country. Of course, it won't be their first major overseas excursion, though. The newlyweds most recently toured Australia, New Zealand, Fiji, and the Kingdom of Tonga in early October.

If the Markle, Harry, and baby Sussex do happen to travel to the United States for their next official overseas tour, they can certainly count on many royal watchers stateside to be absolutely thrilled by their visit.