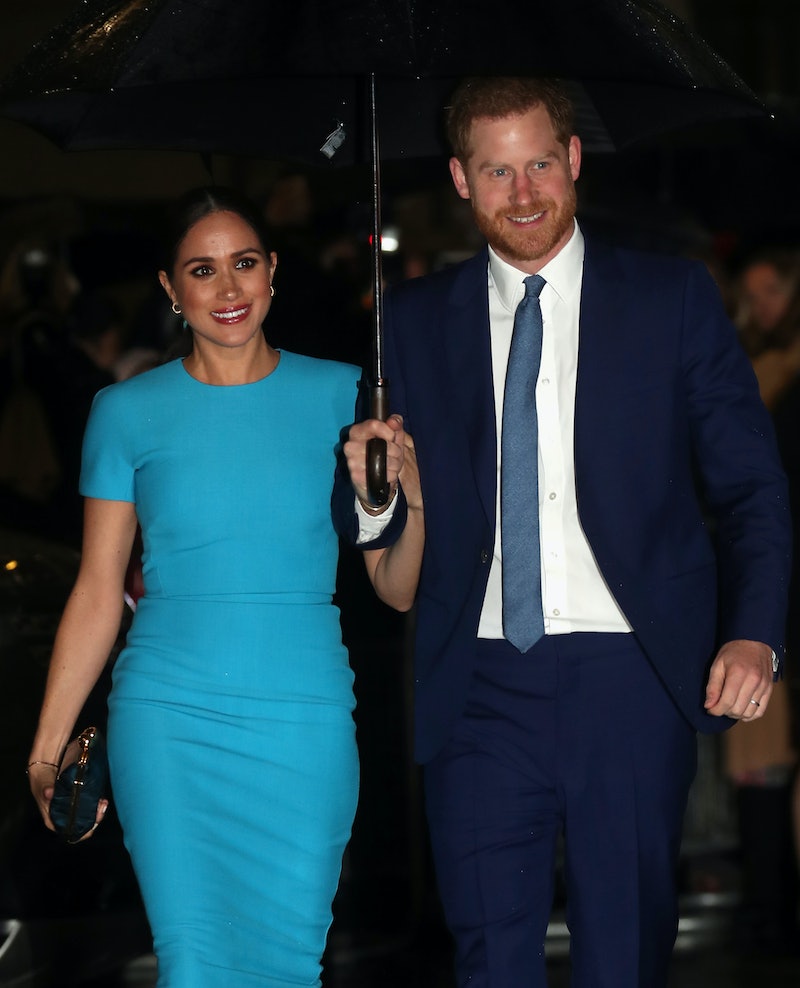 Prince Harry, the Duke of Sussex, and Meghan, the Duchess of Sussex are back in England after announcing their plans to exit their roles as senior members of the Royal Family. On Thursday, March 5, Harry and Meghan made their first public appearance since their announcement at the Endeavour Fund Awards. The ceremony honors sick and injured servicemen and women — a cause that's close to Harry's heart.

Prior to Thursday's event, Jan. 7 was the last time the couple stepped out on behalf of Queen Elizabeth. At the time, they visited Canada House to thank the Canadian people for hosting them during their vacation. Harry and Meghan have since made their move to Canada permanent, and announced their goal to be financially independent from the crown, per The Guardian.

Royal reporter Omid Scobie shared a video via Twitter of the couple arriving at Mansion House where the award ceremony is set to be held, and it seems Meghan and Harry faced a rainy return to England. Despite the weather, a crowd showed up to cheer for the Duke and Duchess as they made their way into the event.

While Meghan only recently landed in the UK, Harry arrived last week to attend an eco-tourism summit in Scotland, as reported by the Guardian. Prior to the Endeavour Fund Awards, the couple was spotted at Buckingham Palace, and later at Goring Hotel, where they reportedly had a private lunch.

Meghan and Harry were all smiles as they huddled under an umbrella and held hands during their public outing, but one member of their family is noticeably absent: Archie, the couple's 10-month-old son, did not make the trip to England with his parents. Earlier this month, the Times reported that they decided to leave Archie in Canada with his nanny while they wrap up the last of their public engagements for the Queen.

Archie won't have to miss his parents for long. The couple's last engagement is scheduled for Monday, March 9 when they will join the rest of the senior members of the Royal Family for the traditional Commonwealth Day service held at Westminster Abbey. Additionally, Meghan and Harry's official spokesperson told the Guardian in a statement: "In addition to the official engagements the duke and duchess are conducting over the course of the next few days, they are also meeting privately with several of their patronages."

Harry and Meghan's official end date as senior members of the Royal Family is March 31. At that point, they will give up their royal titles and no longer represent the Queen in an official capacity. (The agreement is set to be revisited in a year.) In January, Harry explained why the move was essential for his young family during a speech at the London fundraiser for his charity Sentebale.

"I hope that helps you understand what it had to come to, that I would step my family back from all I have ever known, to take a step forward into what I hope can be a more peaceful life," Harry said in reference to the treatment Meghan has faced from British tabloids.

Harry continued his speech by assuring the British people that while he's stepping back from royal duties so that he can focus on the well-being of his family, he and Meghan will continue to support the Crown. "I will continue to be the same man who holds his country dear and dedicates his life to supporting the causes, charities and military communities that are so important to me," he said.

More like this
Twitter Is Saying The Same Thing About Beyoncé's Renaissance World Tour
By Shahed Ezaydi
How To Buy Tickets For Beyoncé’s UK Renaissance Tour Dates
By Shahed Ezaydi
Michaela Coel Has Some *Thoughts* About The Nepo Baby Discourse
By Maxine Harrison
Turns Out George Clooney Is A Huge Fan Of This Classic British Game Show
By El Hunt
Get Even More From Bustle — Sign Up For The Newsletter
From hair trends to relationship advice, our daily newsletter has everything you need to sound like a person who’s on TikTok, even if you aren’t.