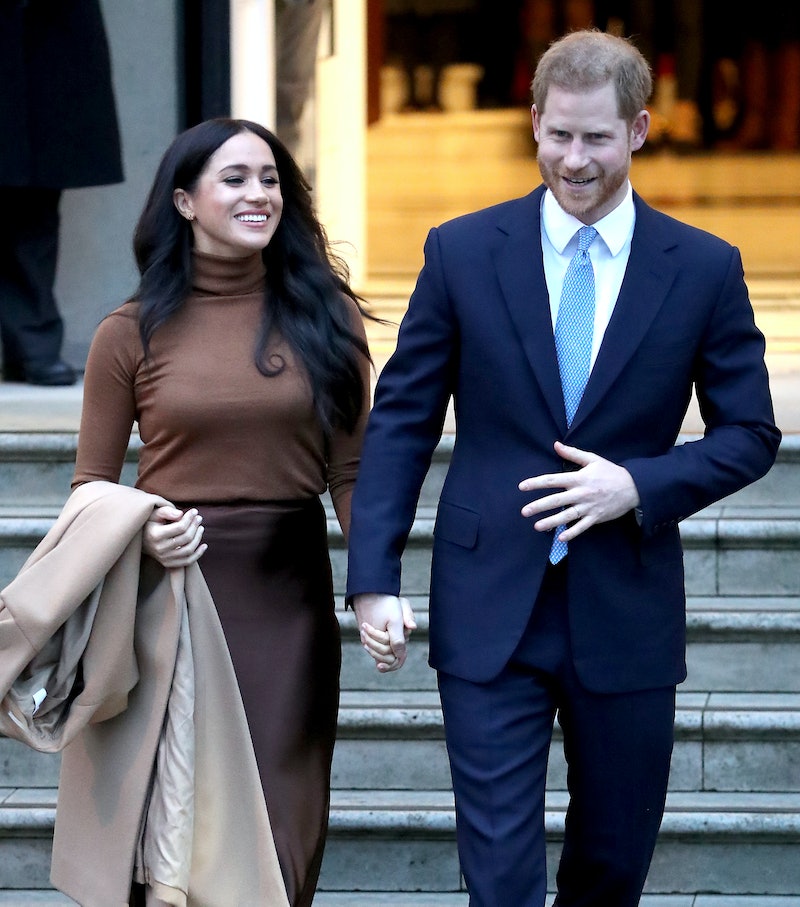 Following a statement formalizing Prince Harry, Duke of Sussex and Meghan Markle, Duchess of Sussex stepping back from from royal life, a palace official reported Meghan and Harry's arrangement will be revisited in one year to review the decision, according to People. On Saturday, the couple shared an official statement from Queen Elizabeth on Instagram, revealing that the royal family had found a "constructive and supportive" way forward for the couple. The Duke and Duchess of Sussex's new status will go into effect spring of 2020.

Last week, Meghan and Harry announced their decision to step back from royal duties, and to split time between the United Kingdom and North America, on Instagram. The couple explained that their plan is to "carve out a progressive new role in this institution," and "work to become financially independent." The decision, while uncommon, is not shocking, given how they've foregone royal duties to focus on charitable efforts. It seems that the British tabloids' scrutiny of the couple also played a role in their decision to step down as senior members of the royal family.

On Instagram, Buckingham Palace acknowledged the negative media coverage, with Queen Elizabeth writing, "I recognize the challenges that they have faced as the result of the intense scrutiny over the last two years and support their decision for an independent life."

On Monday, Queen Elizabeth held a family summit at her country home in Sandringham, according to The Washington Post. Prince William and Prince Charles also attended the meeting, during which an agreement seemed to be met. On Saturday, Queen Elizabeth issued a groundbreaking statement on the deliberations, as per People, admitting that she "would have preferred them to remain full-time working Members of the Royal Family" but that the royal family does, "respect and understand their wish to live a more independent life."

Her statement also conceded Harry and Markle's decision not to rely on public funds would be honored, informing followers that the couple would begin to spend more time in Canada during the transition period. Harry and Meghan will abdicate their royal titles and forego state funding, but Prince Harry will remain sixth in line for the crown, according to The New York Times. Of course, making all of these complex arrangements will take time, and the royal family also stated, "there is some more work to be done, but I have asked for final decisions to be reached in the coming days."