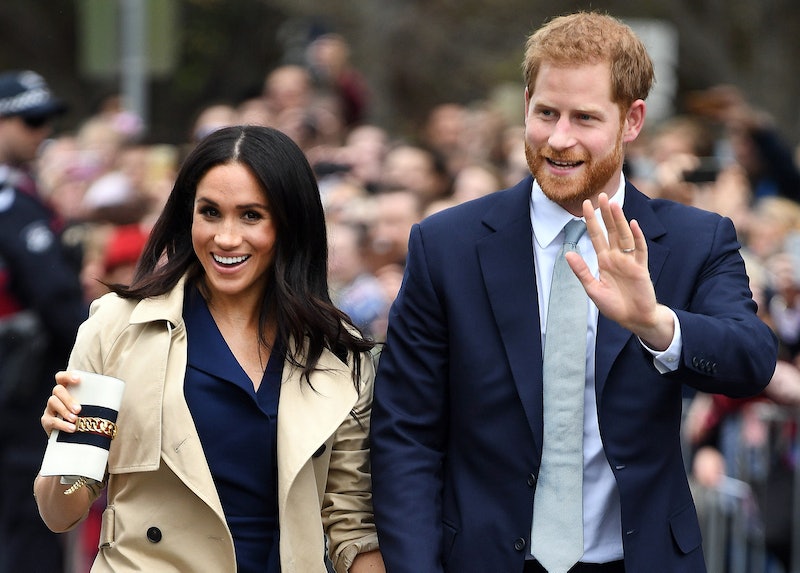 Ever since Prince Harry and Meghan Markle landed Down Under, I've not been able to take my eyes off them. It's been a fair few months since the couple tied the knot, and they couldn't be more in love if they tried. I mean, it's no surprise that Meghan Markle and Prince Harry's body language is a pretty big talking point at the moment, and so it should be. But what I want to know is, what does all this hand holding and lovelorn glances say about the royal couple's relationship as parents-to-be?

Well, it turns out that romantic gestures such as holding actually have scientific connotations. According to researcher Tiffany Field, holding hands can reduce anxiety when exposed to stressful situations, as she has seen in numerous studies. "They found that, in fact, people who were given this stressful task, if they'd been holding hands or being hugged, they would have a lower blood pressure and lower heart rate, suggesting that they were less stressed," Field explained to NPR.

To further explore this, I reached out to body language expert Craig Baxter who tells me how in the photo of the couple on the beach, "Harry is there to comfort her if required," as the way in which she is moving her hair behind her ear could be a "pacifying gesture, often performed out of feeling slightly anxious/nervous about being amongst large crowds." Baxter also points out that "her smile this time looks a lot more forced and unnatural than when engaging with her husband."

You can also see this in the photo below, as Markle's smile seems a lot softer here. "What's cute about this picture is that they get as close to each other as they possibly can without whacking each other's umbrellas," Baxter tells me.

"This may seem innocuous, however it's a subtle and silent action often performed subconsciously, meaning that they stay connected to each other despite the terrible weather. Meghan's beaming smile would brighten up the dreariest of days." Oh, I totally agree. I cannot get enough of that photo.

While public appearances and speaking kinda is the job as a royal, the constant hand holding could be a way for the couple to anchor themselves to each other and feel safe, and ensures the world that they are a team. "It helps them move well together and to read one another's thoughts and emotions," body language analyst Judi Brown explained to the Daily Mail. "It's a public announcement of the desire to be seen as a fully-integrated and linked double act."

The same can be seen in their facial expressions. From candid to meeting with guests, Harry and Markle often share a smile or a laugh at the same moment. There's gotta be something of importance in this synchronicity, so I reached out to body language expert Dr. Lillian Glass for further insight.

"Their relationship shows they have fun and are on the same page," she tells me. "They both are in sync as they have the same facial expressions and are in step with no need to look at each other for guidance." IMHO, it's as though they can read each other's auras, especially when it comes to their humour, as "they laugh a lot together and are clearly a solid team."

It's this fluidity and demonstration of teamwork as a couple that naturally draws you towards them, and has continued to do so throughout the first few days of their royal tour.

And with news that they're expecting a baby next year comes a whole new wave of adoration between the couple, especially whenever they get the chance to meet with their youngest fans, as Dr. Glass points out, "they both adore children as they glow when they are around them."

Baxter agrees, telling me that the couple "display warm and happy body language to each other, love being in each other's personal space," and personally feels that "they'll make wonderful parents too."

Thanks to all this info from experts, I'm going to be watching Markle and Harry's body language with an eager eye throughout the rest of this royal tour, that's for sure.