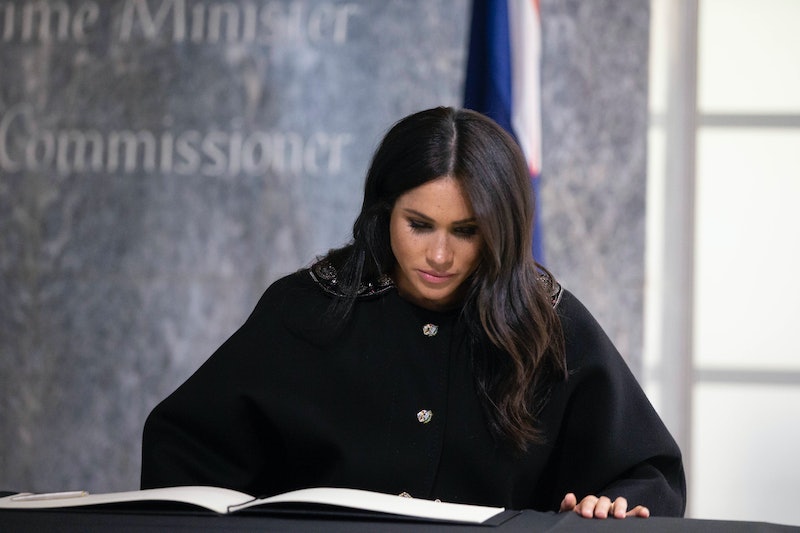 Only a few days have passed since the horrific mosque shootings that took place in New Zealand. Sympathies are still pouring in from around the world for the victims and their families, and the latest to offer condolences is the British royal family. On Tuesday, Meghan Markle wore earrings from New Zealand's prime minster while offering condolences to the victims in London. While Markle's choice of clothing and accessories can seem trivial, her decision to wear the earrings is another way the Duchess of Sussex chose to honor the grieving country.

Prince Harry and Meghan Markle stepped out in an unexpected visit to New Zealand house on March 19, and the event is particularly notable since Markle had reportedly gone on maternity leave as of March 14 and was no longer said to be appearing publicly. The Duke and Duchess of Sussex, however, clearly wanted to pay their respects to those lost in the New Zealand mosque shootings.

Despite being on maternity leave, Markle stepped out in a somber, all black coat-cape hybrid with an embellished neck that she paired with black pumps. The muted nature of the ensemble was likely intentional, and her accessory choice certainly seemed to be as well. Markle's earrings are from New Zealand designer Boh Runga and were a gift from Prime Minister Jacinda Ardern, according to Meghan's Mirror.

In case you don't follow the royal travel schedule, Markle and husband Prince Harry may have a closer relationship to New Zealand and its officials than other members of the royal family. The couple was just in the country in October 2018 on a royal tour. It was during their time in the country that Markle met Ardern and was gifted the earrings.

According to Grazia, the piece is the Discologo style which features two feathers lying on top of one another in an X shape. According to the designer's website, the feathers are known as Miromiro feathers and are a "magic token" from Māori mythology that brings loved ones back together.

Markle, of course, didn't just honor the victims of the mosque shootings through her earrings, though it was a sweet touch. She and Prince Harry left flowers at New Zealand House and went inside where royal reporter Rebecca English explains they signed a book of condolences. The pair also met with staff while there.

While Markle's outfit and accessories are small parts of she and Prince Harry's outing today, the Duchess's decision to wear earrings gifted to her by the New Zealand Prime Minister from a designer based in New Zealand that featured ties to Māori mythology is important. The earrings are another way Markle chose to pay tribute to the country and the victims of the mosque shooting.

While it's unlikely that Markle will be seen again until the birth of she and Prince Harry's child, her trip to New Zealand House is a sweet, last public moment for the expectant mother. Plus, the trip shows that the Duchess can use fashion to send a message, and her Boh Runga earrings illustrate her solidarity with the people of New Zealand.