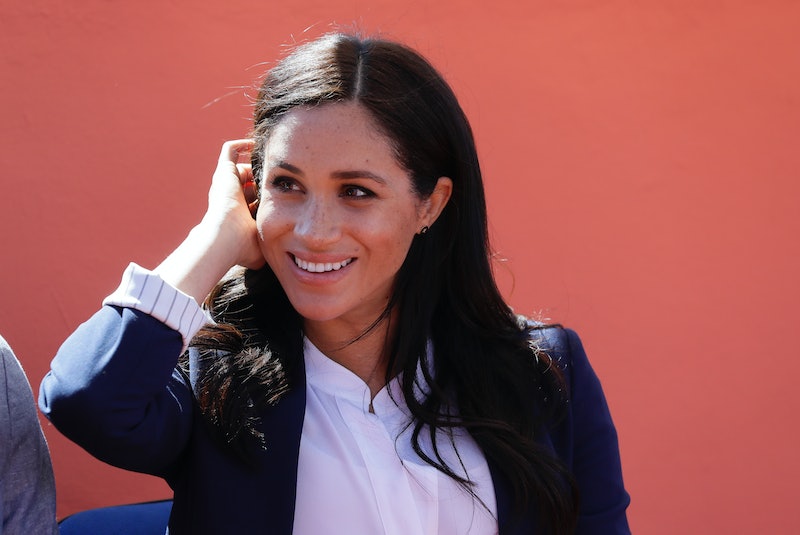 In the days leading up to a major arrival for the Duchess of Sussex, a series of departures are taking place. Multiple outlets, including Us Weekly, report that the Meghan Markle's assistant private secretary, Amy Pickerill, will be leaving her position after the birth of Meghan and Harry's child in the spring. The Duke and Duchess of Sussex are set to move to Frogmore Cottage in Windsor, England this month, and Pickerill is expected to stay on through the transition as well. Rumors have continued to swirl surrounding Markle's staff, which has seen a few key people leave in the past year. Melissa Touabti, Meghan's personal assistant left her role last month after six months on the job. The Sunday Times reported in December that Harry and Meghan's interim private secretary Samantha Cohen would be leaving after Baby Sussex's birth as well.

The list of resignations has plagued the royal with unfounded accusations of difficulty. But as it turns out Pickerill's exit has been in the works since she began a year ago and will leave her on good terms with the Duchess. A source told NBC News that "Amy will be leaving but has agreed to stay on to help following the birth of the baby. She and Meghan are very close and it's all very amicable. She has been with her since she moved from Canada and she will remain as a personal adviser to her in the long term." Kensington Palace has yet to comment on the resignation.

Pickerill not only provided personal support for Meghan in her travels from Canada, where she lived while shooting her TV series Suits, to the UK, but in an official capacity as well. She is said to have played a large part in one of Meghan's first major projects as a Royal— a cookbook honoring victims of the Grenfell Tower fire titled "Together: Our Community Cookbook."

Meghan has managed to blaze her own trail since becoming a royal, one that often gets overlooked when stories of supposed (and unfounded) diva-like behavior towards her staff get reported. From her various charitable endeavors to her overarching feminist vision, demonstrated recently during her participation in an International Women's Day panel, it's clear a shift in staff will not stop the Duchess from doing amazing work.

Society's tendency to brand a powerful woman as demanding or unlikable helps narratives about female royals persist. Such stories feed into the very sexism she's aiming to fight over the course of her life. So who would blame the royal for staying off Twitter and staying in for some well-deserved Netflix instead, as she shared during the IWD panel.

The spring will bring many fresh starts for the Duke and Duchess of Sussex, who in addition to moving and welcoming a son or daughter, are transitioning work-wise. As previously reported, William and Harry are parting professionally, dividing staff and each centering their focus on separate ventures. This would imply that some staff shakeups are all a part of the process and that the royal household is likely not in as much flux as many would have you believe.

This news isn't the first, second, or 50th change Markle has undergone in the last few whirlwind years. Chances are, she's taking it all in stride.